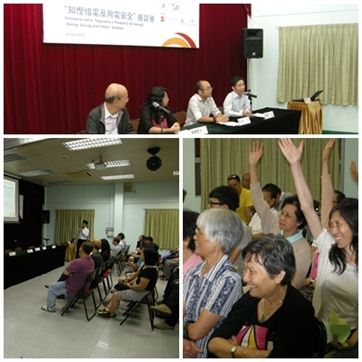 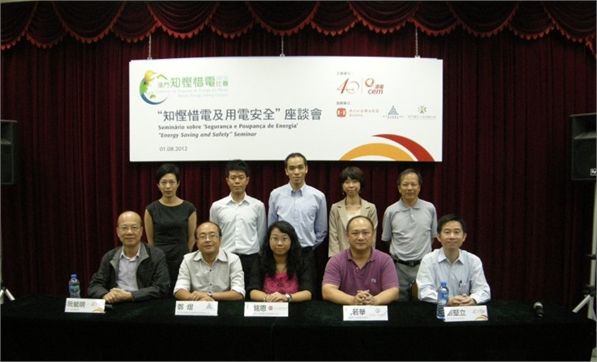 The seminar aimed to impart to residential and commercial customers of the Taipa district the tips for energy saving and electrical safety at home and to promote the maintenance on public electrical installations of buildings as well as CEM’s customer services. Participants of the seminar included Deputy Director Leong Meng Ian at the Taipa Office of the Macao Federation of Trade Unions, Deputy Director Cheng Yuk at the Taipa Office of the General Residents Association of Macao, Chairman Iun Ioc Va at the Industry and Commerce Federation of Islands of Macao, Advisor to CEM Executive Committee Iun Iok Meng, CEM Customer Services Department Senior Manager Keegan Cheang and CEM Communications and Public Affairs Senior Manager Cecilia Nip. Iun Iok Meng said due to the recent scorching weather, the enclave has been in the peak season for power consumption. To fulfill its social responsibilities and to promote the concept of environmental protection and energy saving among the public, every year CEM will hold the “Energy Saving Contest”, which has helped save 17 million kWh of electricity from 2009 to 2011. A new category in the contest, the “Residential Group” was added this year, with a view to accredit residential customers who excelled in energy saving. As of the registration deadline for the contest (July 15), 1,528 residential customers have enrolled in the contest, and there are 350, 35 and 32 participants in the Public Building Group, Restaurant Group and Hotel Group, respectively. The number of participants proved that Macao citizens have a high awareness of energy saving. Comparison will be based on the six consecutive billing months of electricity consumption from June to November 2012 with the same period in 2011, and those who save the highest percentage of energy will be the winners of the contest. Iun Iok Meng said the contest will help participants reconsider their habits of energy consumption in daily lives, so that they would stick to energy saving measures in the future.

Keegan Cheang said regular inspections and maintenance should be conducted on public electrical installations in buildings to ensure their safety. Many high-rise buildings have been newly built in Taipa. These buildings are newer compared with those in other districts, but residents should also pay attention to the maintenance and repair of their public facilities, so as to prevent failures of electrical facilities and the accidents that might follow. CEM has always been attaching importance to the communication with customers and residents’ needs. In addition to the discussions held in the neighborhood regularly to strengthen communication with citizens, the company also encourages citizens to save energy in their daily lives and choose the appropriate and safe home appliances. Keegan hopes that residents could realize the importance of the maintenance and management of public electrical installations in buildings, so that their daily lives will not be affected because of the lack of maintenance. At the seminar, Leong Meng Ian pointed out that due to the recent sizzling weather and the growth of Macao population, tourists and migrant population, the daily power consumption in the whole of Macao has been constantly on a rise, hitting a peak of 751 MW on 18 July, up nearly 4% from the 725 MW in the same period last year. It shows residents have an increasing demand for power. Leong Meng Ian is glad that the Taipa Office of the Macao Federation of Trade Unions can partner with CEM, the Taipa Office of the General Residents Association of Macao, and the Industry and Commerce Federation of Islands of Macao to organize the seminar to facilitate communication between residents and CEM engineers, raise residents’ awareness about power safety, and let residents realize that CEM has been sparing no effort to provide high-quality customer services. In addition, she is in support for CEM to organize the “Energizing Tour” and “Energy Fun Fair”, imparting to residents the correct knowledge of power consumption, and for the power company to launch the Senior Citizen Support Program. She hopes every resident can join the energy-saving campaign to cherish resources. They can change the previous power consumption habits and use energy-saving products to reduce power usage, in order to contribute to environmental protection.

At the seminar, CEM Customer Services Department Engineer Sin Ka Man introduced about how to select energy-saving and safe electrical appliances, and suggested practical household energy-saving measures. Besides, CEM Customer Services Department Engineer Clark Tang talked about the maintenance and management of public electrical installations, taking this opportunity to explain about the types of responsibilities in regards to the public electrical installations in buildings, frequently-occurring problems in maintenance and the severity of these problems. Customer Services Department Customer Contact Centre Officer Deolinda Ma informed the participants about CEM customer services, including e-Service to provide customers with 24-hour service of bill enquiry, service application and changes. Deolinda also encouraged customers to use services like e-bill, SMS payment reminder and Autopay, and gave explanations to FAQs about the government’s subsidy.