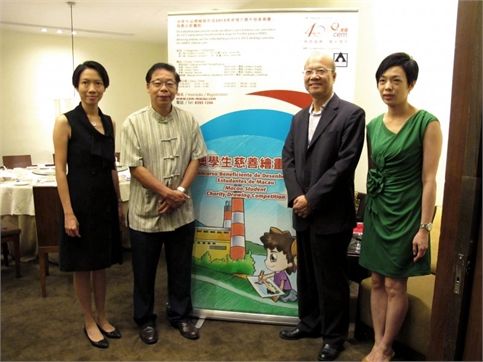 To tap the infinite creativity and stimulate artistic potential of the youth in Macao, and to celebrate the 40th anniversary of the CEM, CEM will hold the Macao Student Charity Drawing Competition in September. The Competition is co-organized by Macao Artist Association and ORBIS. Winning entries will be collected to produce a 2013 desktop calendar for charity sale and raise funds for ORBIS.

Participants should draw their pictures on the spot and hand them in within the prescribed time limit. There is no restriction on types of drawing (both live drawing and free-style drawing are allowed). Each participant may submit four drawings at most (one drawing for each time period).

Lai Ieng said different from other student drawing competitions, this one not only allows teenagers to participate in fundraising events, but also familiarize them with the process of electricity generation. It’s unique and meaningful. Vivian Lo extended her gratitude to CEM for hosting the Competition and fundraising event to raise money for ORBIS, which enables more visually impaired people to recover their sight and more local teenagers to engage in fundraising events and to understand the work of ORBIS.

The enrollment for the Macao Student Charity Drawing Competition starts now and ends on September 6. Competition rules and application forms are available for download from CEM website www.cem-macau.com. For enquiries, please contact Mr. Sou from CEM Communications and Public Affairs Office on 8393 1206.