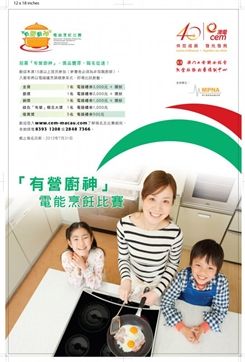 To celebrate the 40th anniversary of CEM and promote the use of induction cooker and the concept of “healthy eating culture”, CEM and Catering Services & Cooking Training Centre of the Association of Macao Federation of Trade Unions jointly organize the “Healthy Eating” Electric Cooking Contest, which is designed for amateur cooks above the age of 18 and to be held on September 2.

The Contest aims to promote the use of environmental-friendly induction cookers, as well as to raise citizens’ attention to healthy eating. Participants are required to design a dish that is based on the principles of balanced nutrition, and describe the design concept of the dish. The judges will take the design concept into consideration as part of the criteria for the selection of finalists for the Contest.

During the press conference for the introduction of rules and regulations of the Contest, Iun Iok Meng, Advisor to the CEM Executive Committee, said that apart from promoting the use of environmental-friendly induction cookers among citizens, the Contest also aims to enhance citizen’s knowledge about healthy eating, so that they can develop a healthy lifestyle and select food with balanced nutrition.

CEM Communications and Public Affairs Senior Manager Cecilia Nip indicated that induction cookers enjoy many advantages. Besides being able to reduce grease exhaust and keep the kitchen clean, they can also spare cooks the trouble of watching the heat, as most induction cookers are set with time and temperature control functions, making them a good helper for modern homes. In addition, inductions cookers can conduct the heat evenly to the kitchen appliance, reducing the use of oil and thus, making cooking with them healthier than traditional means.

Kuong Chi Fung, Director of Catering Services & Cooking Training Centre of the Association of Macao Federation of Trade Unions, said evaluation criteria include the environmental-friendly ingredient selection; color, smell, taste and appearance; nutritionally-healthiness, hygiene and practicality, adding that the judging panel will not take into consideration of the value of the ingredients. He also encouraged citizens to design nutritious recipes by themselves to upgrade their life quality.

Vong Vai Pui, Macau Chinese Cuisine Association Chairman also agreed with the Director. He also called on the catering industry to adopt more healthy recipes and cooking methods to carry forward the healthy eating culture. The Contest comes in two stages, namely the selection of recipes and the cooking contest. Participants should fill out the enrolment form and submit a photo of the dish to designated spots. The judging panel will select 20 finalists from the entries to participate in the cooking contest scheduled to be held on September 2. Winners of the Gold, Silver and Bronze Awards will receive electrical appliance coupons of MOP3,000, MOP2,000 and MOP1,000 respectively. Green Concept Award winner will receive electrical appliance coupon of MOP1,000, while five Excellence Award winners will receive electrical appliance coupon of MOP500.

The information and enrolment form of the Contest can be obtained at the Service Centres of Macao Federation of Trade Unions or downloaded from www.cem-macau.com. For enquiries please dial 8393 1208 or 2848 7366.