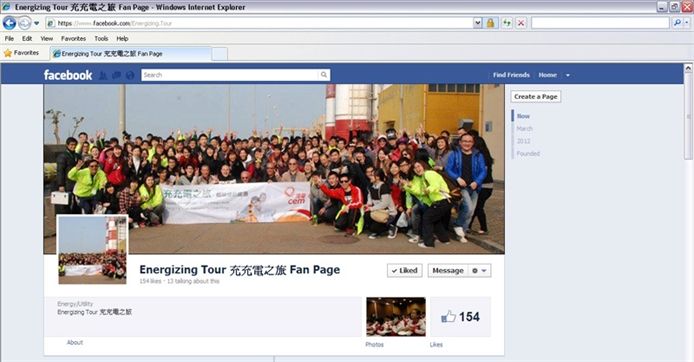 Since its launch in June 2009, CEM Energizing Tour has been a tremendous success with over 12,000 citizens from all corners of the society visited CEM Coloane Power Station. More than 300 tours were conducted, including school students, major local associations, companies, public in general and even international groups. This initiative is proved to be very successful and has become really popular among Macao citizens.

CEM appreciates the interest of the public to get to know better the Company’s facilities and operations. To make the Tour even more interactive and interesting, CEM has created a facebook fan page. Visitors can share their photos taken during the visits, give feedback for improvements, and interactively discuss ideas and share experiences with each other. This is an important channel of getting close to the customers and share with them directly what they feel about CEM initiatives and how CEM can improve in future initiatives.

All citizens are invited to visit Energizing Tour Fan Page at www.facebook.com/Energizing.Tour, be part of this big fan’s group and share it with their family members and friends.

CEM Energizing Tour features a closer look at the major power generation infrastructures in CEM’s Coloane Power Station. Visitors have a chance to know better how electricity is generated in Macao.

Visits are conducted during weekdays for schools and local associations, from 10:00am to 12:00pm or 02:30pm to 04:30pm. Starting from June, in the first and third Saturdays of each month, in the same schedule, tours will be open for public. Details will be provided in due time. For enrolment, citizens can either call 8393 1202, fill in the Reservation Form at www.cem-macau.com, e-mail to visitcem@cem-macau.com or fax to 2871-9687.