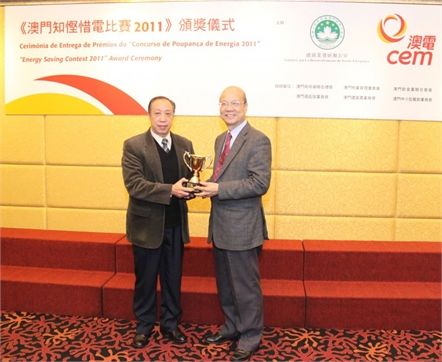 The “Macao Energy Saving Contest 2011” jointly held by CEM and the Office for the Development of Energy Sector (GDSE) has received active participation and support from many organizations, including the General Residents Association of Macao, Property Management Business Association Macao, United Association of Food and Beverage Merchants of Macao, Macao Hoteliers & Innkeepers Association, Macao Association of Building Contractors and Developers and Association of Small & Medium Catering Enterprises of Macao. The number of customers who participated in this year’s Contest increased by 15% compared to the one held in 2010. The Contest, which began in June 2011 and lasted for six months, has come to a successful conclusion, and the award ceremony was held at the Plaza Restaurant today.

CEM Customer Services Department Senior Manager Keegan Cheang said in a speech that CEM hopes to take this contest as an opportunity to draw attention from the public, especially market players in the property management, hospitality and catering sectors, to energy saving. It was of great significance that the Contest kicked off in summer, a peak season of electricity consumption. The Contest consists of four groups –“Residential Building”, “Communal Electrical Installations in Building”, “Restaurants” and “Hotels”. A new “Energy-saving Concept” Grand Award is added. The number of participants increased nearly 15% compared to 2010. The Contest marks notable achievements in energy-saving by saving a combined 3.72GWh of electricity, equivalent to planting 66,961 trees a year. Keegan Cheang congratulated the award winners and extended his gratitude to the co-organizers for their proactive participation and support. He wished the public can continue to keep their good habits to save energy and protect the environment as well as to actively participate in and support this event. In order to let attendants better understand the Environment and Energy Conservation Fund, CEM has especially invited representatives from the Environmental Protection Bureau to introduce the Environment and Conservation Fund launched by the government. During the Q&A session, attendants actively raised questions and expressed their opinions, while representatives from the Environment and Conservation Fund and CEM promptly answered their questions and conscientiously listened to various views.

Altira Macau is crowned with the “Energy-saving Concept” Grand Award for saving highest electricity (768,120kWh). In the award ceremony, Altira Macau Engineering Department Manager Gerald Cheung shared what Altira Macau has learnt from energy conservation and carbon reduction. According to Cheung, Altira Macau has installed a number of energy-saving devices years ago, including reclaimed water recycling system, heat pump units, water economizer, cooling system heat exchanger, smart building management system, central control and monitoring system and so on. In terms of the building system of energy management and strategy, Altira is equipped with automatic smart building management system that is capable of monitoring and controlling temperature and lighting. The hotel is fully replaced with energy-saving lightings, light-sensing switches and motion sensors. Besides, the escalator is equipped with a speed adjustable motor driver to reduce two-thirds of energy consumption when the escalator is empty loaded, and the elevator intelligent management and optimization system, etc.