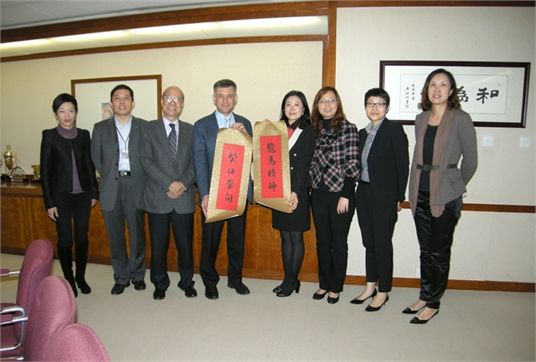 The Association of Caring for School Age Children Macau is organizing a charity bazaar for the forthcoming Chinese Lunar New Year at the Stage at Rua do Campo from 6 to 8 January 2012. Funds will be raised for the provision of new desks and chairs in a middle school in Jiangxi province through selling laisee envelopes and couplets.

CEM took the lead to make a donation for a pair of auspicious couples yesterday in support of the campaign. The printed couplets will be sent along with electricity bills to all customers as New Year greetings.

During the CEM visit today, President Bai Xufei and General Secretary Wong Kuai Leng of the Association of Caring for School Age Children Macau were warmly received by CEM’s Chief Executive Officer Franklin Willemyns, Executive Committee Advisor Iun Iok Meng, Power and Network Dispatch Department Senior Manager Benjamin Yue, and Communications and Public Affairs Senior Manager Cecilia Nip. Franklin Willemyns said CEM exerts all efforts to contribute to the well-being of Macao’s society as Macao is always the home to the Company. CEM is dedicated to supporting local welfare campaigns through its donation to different non-profit organizations. He added that the aim for the Association to support underprivileged students is of great significance, hoping the activity would convey the warmest wishes to more people in need.