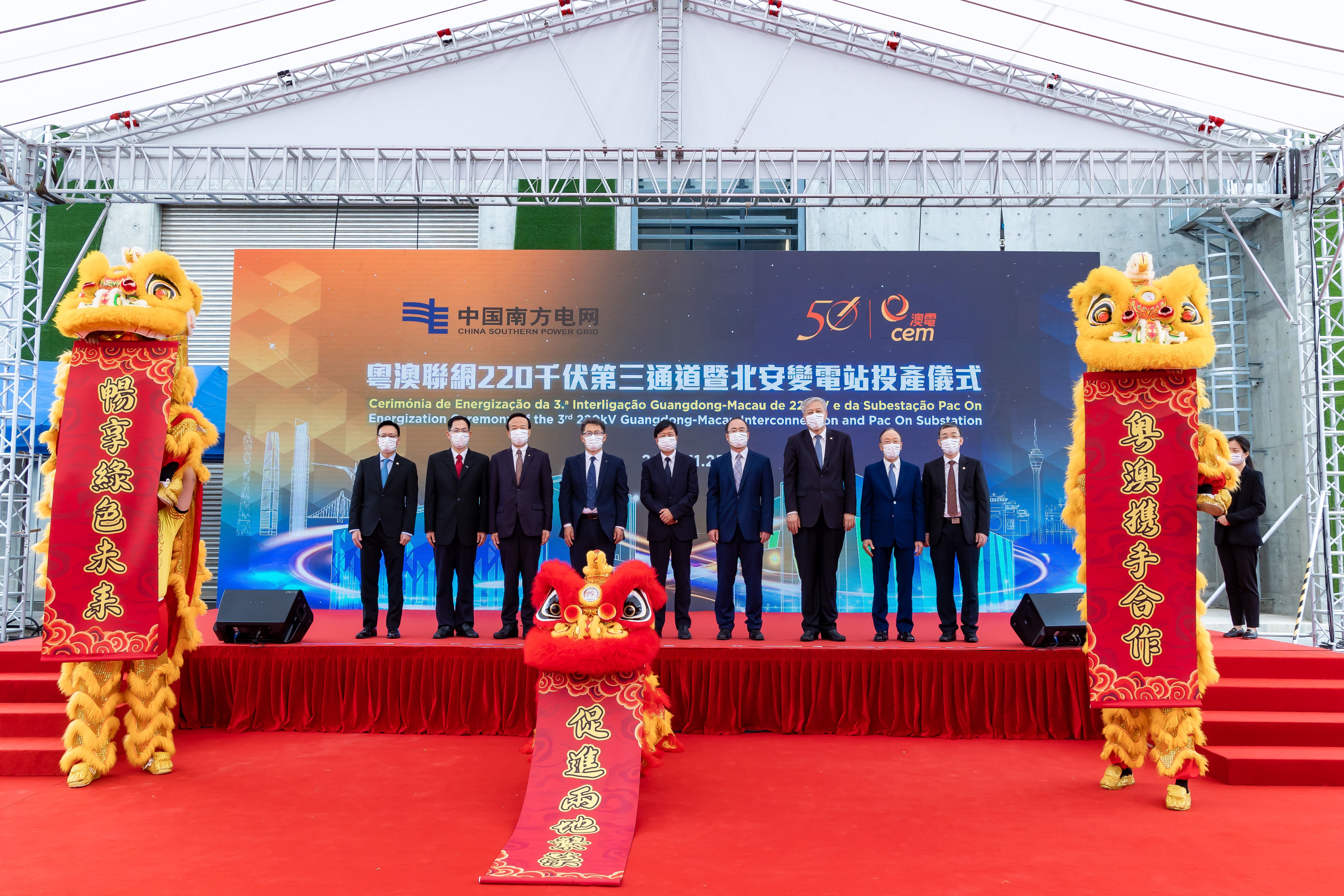 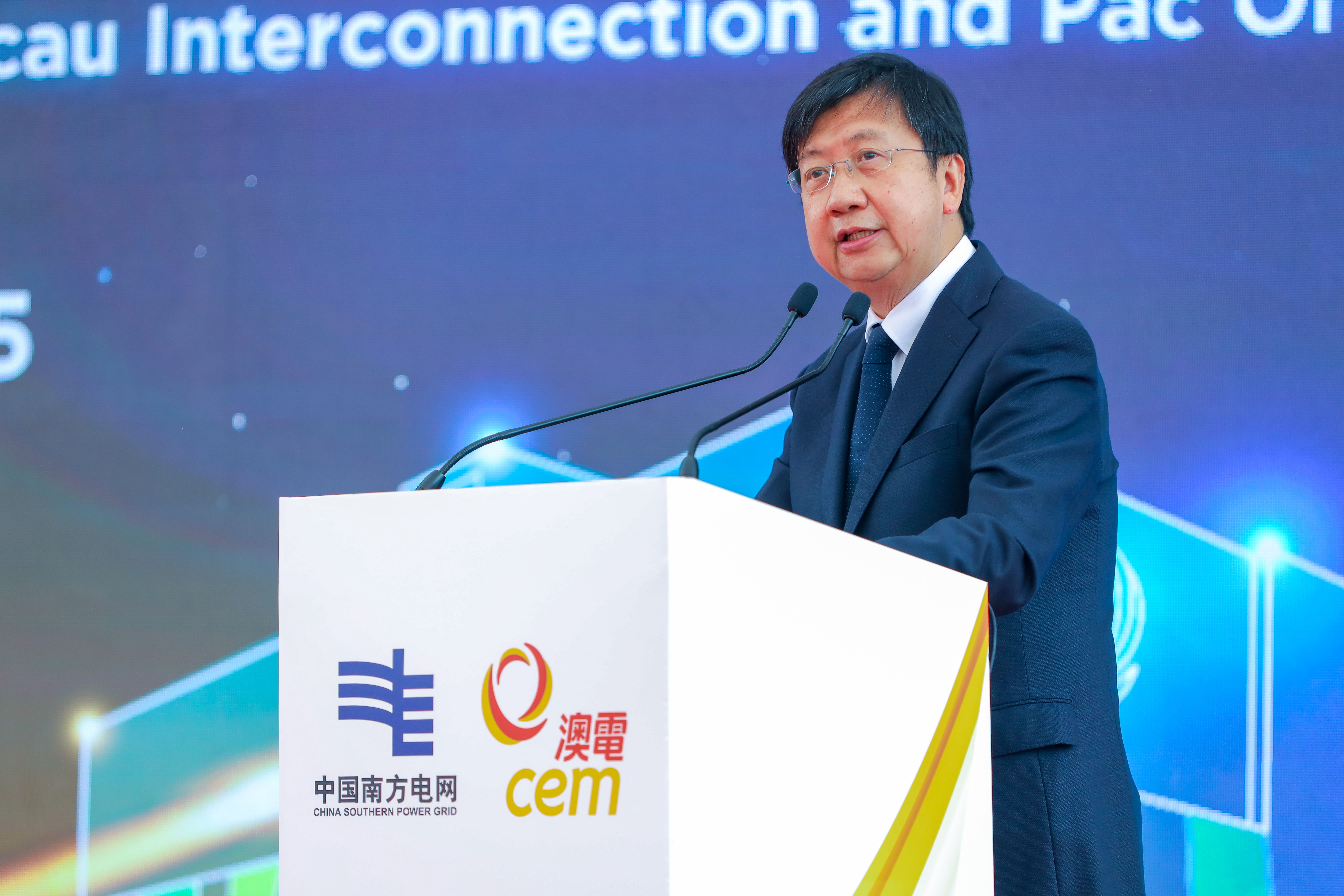 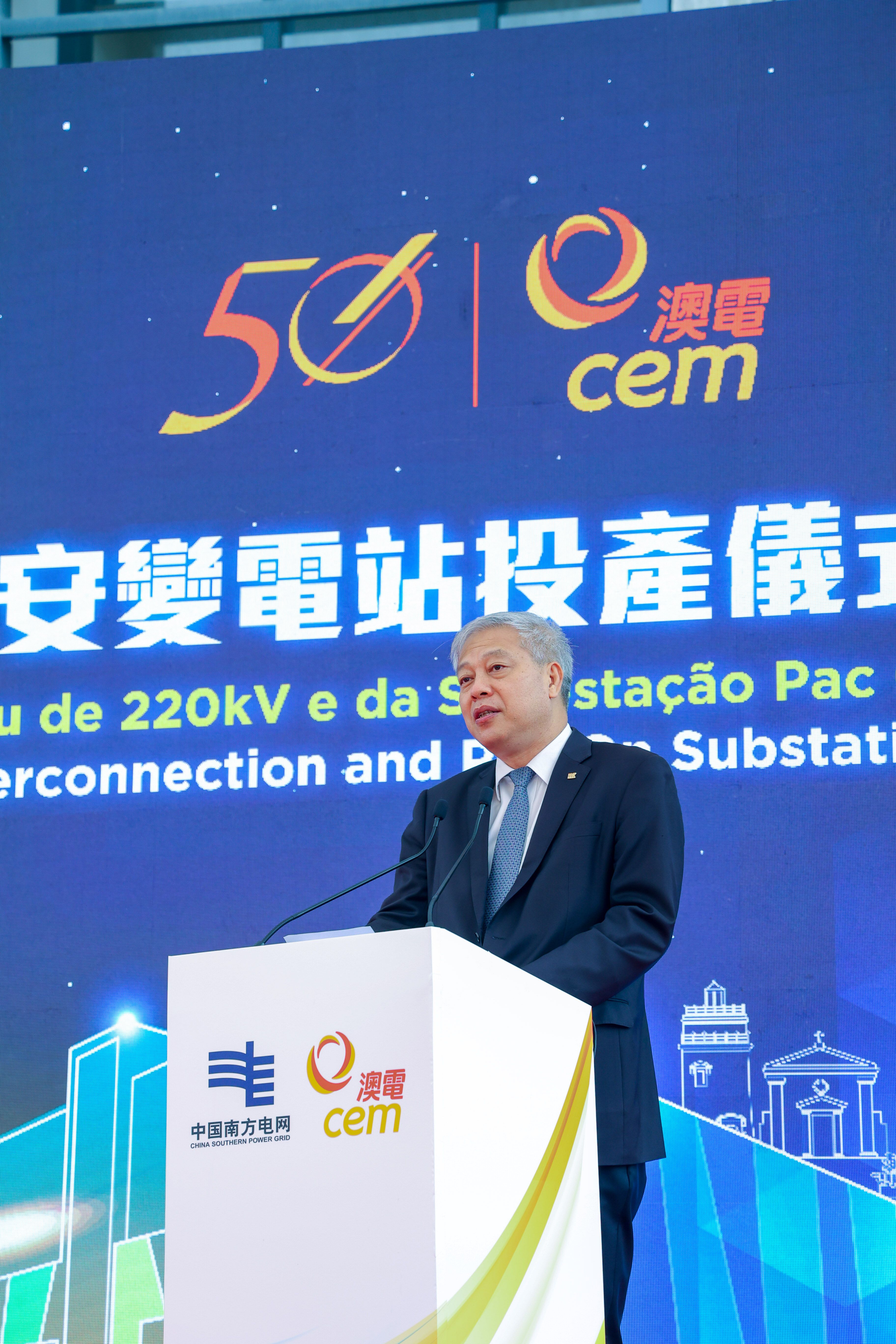 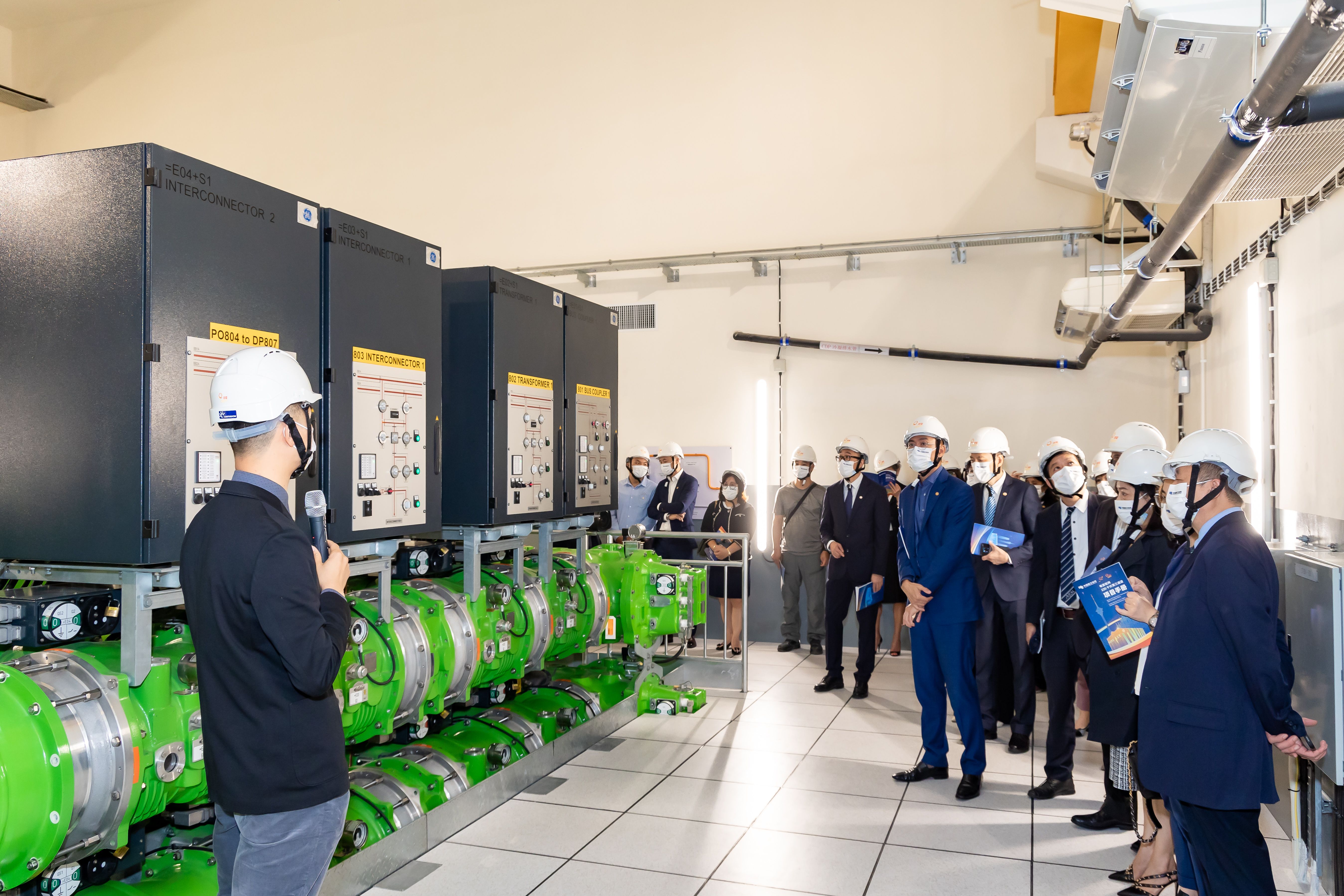 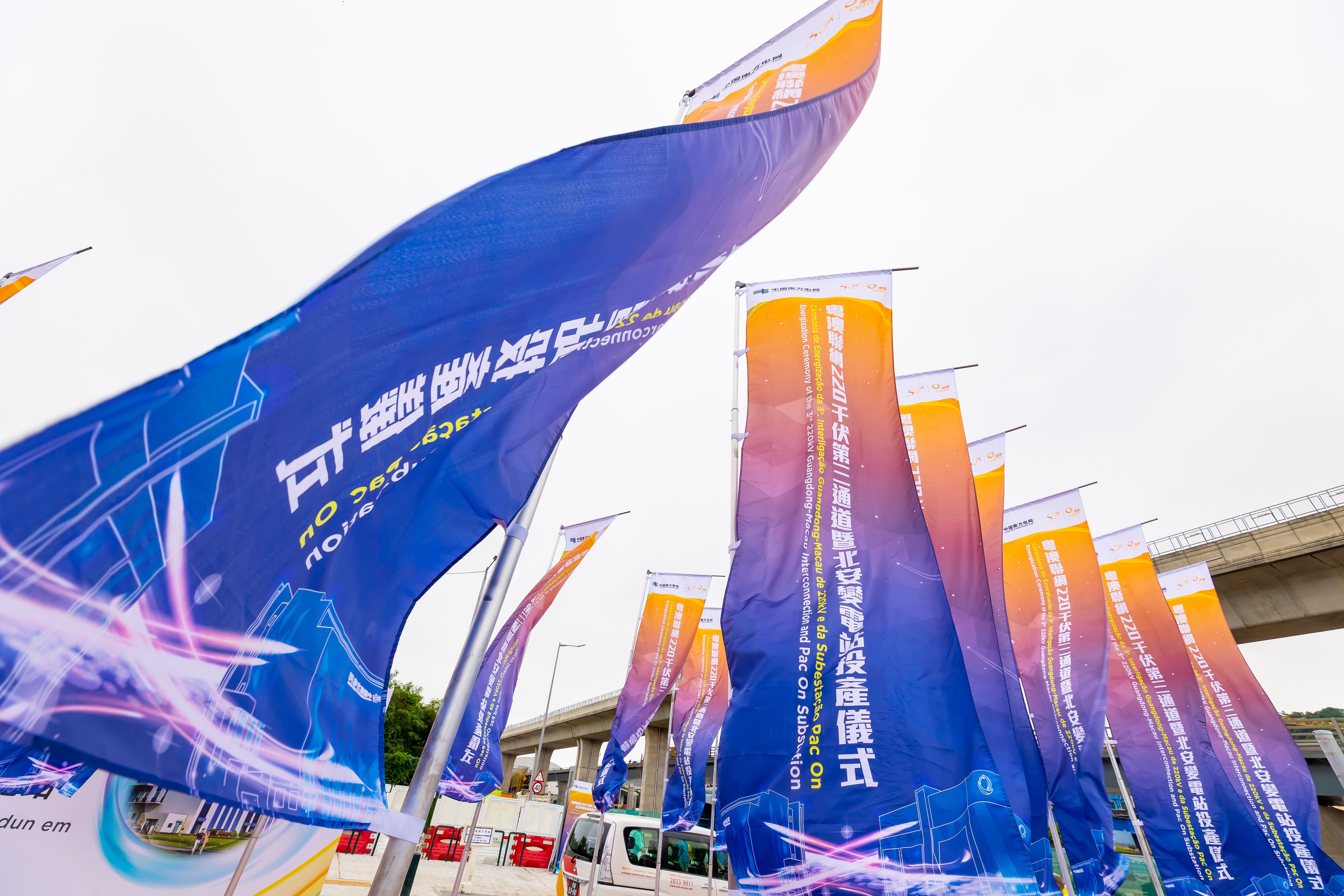 The officiating guests attending the energization ceremony include Tam Vai Man, Representative of the Secretary for Transport and Public Works of the Macau SAR and Director of the Environmental Protection Bureau (DSPA); Huang Shengbiao, Deputy Director of the Economic Affairs Department of the Liaison Office of the Central People’s Government in the Macau SAR; Fu Aimin, Director of the Office of the Commissioner of the Ministry of Foreign Affairs of the People’s Republic of China in the Macau SAR; Lao Ngai Leong, Macau Deputy of the National People’s Congress; Fu Jianguo, Chairman of the Board of Directors of CEM; Chen Shengran, General Manager of the China Southern Power Grid International Co., Ltd.; Vong Kok Seng, President of the CEM Customer Liaison Committee; Bernie Leong, Chairman of the Executive Committee of CEM and Shi Yulin, CEM Executive Director. Meanwhile, Zhang Hu, Executive Vice Governor of Guangdong Province; Ren Jingdong, Deputy Director of the National Energy Administration, and Meng Zhenping, Board Chairman of CSG also attended the ceremony via video.

The project was launched in 2018 and constructed with the methods such as "ultra-long-distance undersea pipe jacking", overcoming the difficulties of laying ultra-long and ultra-heavy high-voltage cables, and successfully passing through three waterways including the national class 1 waterway, Maliuzhou Waterway, to reach Macau. The 3rd interconnection entered trial operation on 6 August this year, upon the commissioning, CSG will be able to supply power via three interconnections in the northern, central and southern Macau and raise its power transmission capacity to 1.7 million kW. Currently, Guangdong-Macau interconnections are connected through 8 circuits of 220kV main power supply lines and 4 circuits of 110kV backup lines, basically meeting Macau’s projected peak demand for the 14th Five-Year Plan period and Macau SAR Government’s “N-1” power supply channel requirements on the reliability of power supply.

The Pac On Substation, which was energized simultaneously, is currently the substation with the highest specification in Macau. It adopts the one-and-half breaker connection mode, which significantly enhances the reliability of power supply and the flexibility of operation and dispatch.During the construction process, CEM has put in a lot of effort in the whole process, from project planning, land approval, scheme comparison and design to construction acceptance; overcoming various obstacles caused by the pandemic, site, construction period, etc., and completed the iconic power facility in Macau.

Fu Jianguo, Chairman of the Board of Directors of CEM said in his speech that 2022 marks the 50th anniversary of the establishment of CEM. Rooted in Macau, CEM has been providing power supply service for half a century. CEM appreciates the Macau SAR Government, shareholders, customers and all sectors of society for their trust and support, as well as the cooperation and dedication of industry partners and project builders. Thanks to the guidance of the Macau SAR Government, CEM, a 50-year-old company still in its prime, will adhere to the low-carbon development strategy, actively integrate into the Greater Bay Area, and continue to inject impetus to help Macau become a smart and green city suitable for living, working and tourism.

Meng Zhenping, Board Chairman of CSG, said that CSG and CEM jointly promote connectivity, ensure the stable operation of the power grid, and promote green development, work together to promote the clean and low-carbon transformation of energy, and the transmission of clean power from outside to the GBA. The GBA power grid has become the world-class bay area power grid with the highest proportion of clean energy consumption. In the future, the two sides will deepen exchanges and cooperation with a closer heart and deeper feelings.

Ren Jingdong, Deputy Director of the National Energy Administration, pointed out that Macau, as a key city of the GBA, has always been closely connected with the mainland, complementing its advantages and developing together. Deepening energy cooperation between Macau and the mainland will strongly promote Macau to achieve its carbon peak goal by 2030 or before.

Zhang Hu, Executive Vice Governor of Guangdong Province, also congratulated the energization of 3rd interconnection and Pac On Substation, saying that it is a great and a happy event for the deepening of cooperation between Guangdong and Macau, which will strongly promote the high-quality development of Guangdong-Macau cooperation. Guangdong Province will take this opportunity to further deepen the cooperation between Guangdong and Macau in energy, power, science, technology, finance, social livelihood and other fields.

On behalf of the Macau SAR Government, Tam Vai Man, Representative of the Secretary for Transport and Public Works of the Macau SAR and Director of DSPA, thanked CSG for its support and cooperation in Macau’s power supply, and also thanked CEM’s efforts and contributions to ensuring power supply in Macau. The completion of 3rd interconnection is a new milestone in the history of Guangdong-Macau power cooperation. It is believed that there will be more cooperation and exchanges between Guangdong and Macau in the field of energy, making greater contributions to the social and economic prosperity and stability of the Macau SAR.

Guangdong and Macau power grid was first established in 1984. At that time, CEM invested in the Shaoguan Power Station in Guangdong to transmit electricity to Macau through 110kV transmission line. The Guangdong-Macau power grid supported each other and jointly served the Pearl River Delta, opening the history of the Guangdong-Macau interconnection. Afterwards, power cooperation between the two regions became more frequent as the scale of power grid transmission increased. The 1st and 2nd interconnections were built in 2008 and 2012, and the Canal dos Patos Substation and Lotus Substation were put into operation one after another. By the end of 2021, Guangdong-Macau power grid was connected by 220kV sextuple-circuit main power supply lines and four circuits of 110kV backup lines, and the maximum power supply capacity was 1.1 million kW.

In 2021, the reliability of power supply based on CEM's responsibility once again reached the world's top level of 99.9999%, while the overall satisfaction in the Customer Satisfaction Survey reached 89.5%, hitting a 10-year high again.