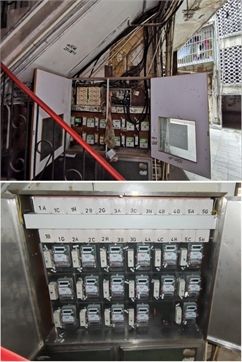 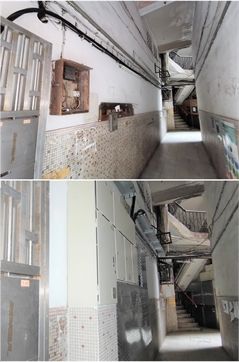 CEM invited the media to a press briefing held at Edf. Sun Po, one of the upgraded buildings aged 48 years on Rua de Fernão Mendes Pinto. It is hoped that more citizens will learn about the results of the “Safety Upgrade Subsidy Program for Communal Electrical Installations in Low-rise Aging Buildings”, thus encouraging citizens who have received invitation letters from CEM to actively respond to participate in the program, in a bid to jointly build a safe and livable environment.

Tommy Cheong, Engineer of Technical Services Management of Customer Services Department of CEM, introduced the upgrade project. The building was plagued with different issues due to its age and lack of maintenance, including dilapidated communal electrical installations, which may be prone to accidents and even fire. The pothead used to be less than 1 meter from the ground, which made it vulnerable to floods. An examination revealed that collective line distribution box (CCL) risked of electricity leakage, exposing residents to the danger of electric shock. With the new design, CEM changed the pothead into a main collective switchboard, and lifted to about 1.5 meters above the ground, which could significantly mitigate the impacts of floods. Moreover, CEM replaced the old earthing conductor of the building with a new one, and connected all metal parts of the building’s communal electrical installations (including CCL) to the earthing conductor, in order to effectively lower the electric shock risk and ensure electricity safety for all households. In addition, considering that residents may increase their electricity demand in the future, the power supply capacity of the communal electrical installations has also been increased during the upgrade.

Mr. Leong, one of the owners of Edf. Sun Po, said that every household used air-conditioners in the Summer, resulting in increased electricity consumption. They normally encountered short circuits frequently before, it never happens again after the upgrade. While the wires in public places used to be very messy, there is no longer exposed cable wiring, assessing the building and use of electricity are much more at ease now. In addition, he remembered that the building was seriously flooded during the strike of the strong typhoon Hato. With the electric boxes raised up to higher position during the upgrade, they don’t need to worry about power supply to be affected by flooding anymore. He is very satisfied with the entire project.

Uman Cheang, Director of Customer Services Department of CEM, said that CEM is constantly inspecting and screening eligible buildings and has sent invitation letters to 68 buildings, involving 1,508 households. A building’s communal electrical installations are jointly owned by property owners, who should bear the responsibility to hire experienced electrical contractors to conduct regular maintenance and repair to ensure both electrical and residential safety. However, many old buildings still have potential electricity safety hazards of different degrees that need to be addressed. CEM hoped that the successful upgrade of the electrical installations in Edf. Sun Po would propel building owners who have received invitations to actively participate in the program, and also would raise citizens’ awareness to the safety of communal electrical installations of their buildings.

“Safety Upgrade Subsidy Program for Communal Electrical Installations in Low-rise Aging Buildings” was established by CEM shareholders who contributed MOP30 million in 2020. It is estimated that 150 to 200 buildings can be subsidized for their upgrade of communal electrical installations in three years, benefiting about 3,000 households. Each case’s subsidy is capped at 80% of the overall project costs and the remaining costs shall be borne by the property owners. With the support of relevant government departments, CEM will conduct technical supervision in accordance with laws and regulations to guide contractors to carry out the upgrade in an orderly manner. Citizens can visit CEM website (www.cem-macau.com) to check whether their building is in the “List of Eligible Buildings” by inputting the building name and learning more about the details of the subsidy program. CEM will update the list constantly.