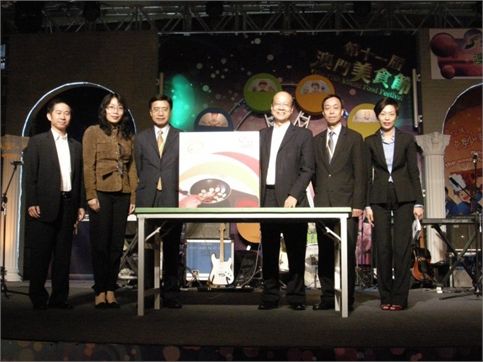 The conventional cooker utilizes fuel burning for heat transmission, resulting in heat loss of over 60%. Whereas, induction cooker uses magnetic coil to cause cookware to produce heat itself, reaching heat efficiency of up to 90%. Cooking time of induction cookers is 30% shorter than using conventional cooker. Furthermore, induction cookers can help reduce energy consumption by 30-50%. In addition, as the heat will not spread outwards, temperature in the kitchen using induction cooker will be 4-5°C lower than that in a kitchen using conventional cooker. Therefore, induction cooker is ideal for open kitchen. The cooker is also easy to clean. Simply wipe the surface with a damp cloth. Since no fire is used, it reduces the danger of burn, scald and fire. . The lucky draw comes to an end in the evening of November 25, with overwhelming responses to the activity. The United Association of Food and Beverage Merchants of Macao President Lei U Weng, CEM Executive Committee Advisor Iun Iok Meng, Customer Services Department Senior Manager Keegan Cheang randomly chose 10 lucky persons who are bestowed one single-head induction cooker each.

The winners will get a notice from CEM. To claim the prizes, winners need to show their Macau ID Card at CEM Communications and Public Affairs Office during office hours. The lucky draw result is shown as follows: