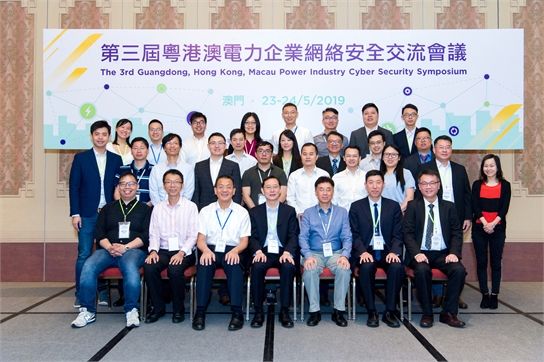 To strengthen exchange and cooperation in cybersecurity between electricity enterprises in Guangdong, Hong Kong and Macau, four major electricity enterprises from the three regions, namely, China Southern Power Grid Company Limited (CSG), China General Nuclear Power Corporation (CGN), CLP Holdings Company Limited (CLP) and Companhia de Electricidade de Macau - CEM. S.A. (CEM), take turns to hold the Power Industry Cyber Security Symposium every year. Through the event, each party is able to strengthen their connections, fully recognize the importance of cybersecurity work, and facilitate cooperation and orderly development to build the “community of shared future for the regional cyberspace of Guangdong, Hong Kong and Macau”. This year, the Symposium was organized by CEM in Macau from 23rd to 24th May.

Evan Liu said in his speech that cybersecurity of the power industry is vital to the normal operation of all information systems, automation systems and equipment, and is the basis for ensuring safe and stable operation of the power system. In case of any information loss, leakage or assault on the systems, the national security, public interests and the security of system operation will be seriously threatened, which will entail economic losses. As the Internet is highly developed today, power companies face many cybersecurity challenges, such as shortage of experienced cybersecurity talents, hidden risks as a result of loopholes in internal systems and official websites, and inadequate capacity for cybersecurity contingency management. To resolve these problems, it is necessary to step up efforts in the wider use of cybersecurity technologies and cultivate more talents in cybersecurity.

Besides the sharing of articles, representatives from each party also visited Companhia de Telecomunicações de Macau S.A.R.L (CTM) to learn about the largest IT data center and network management center in the telecommunications industry of Macau.