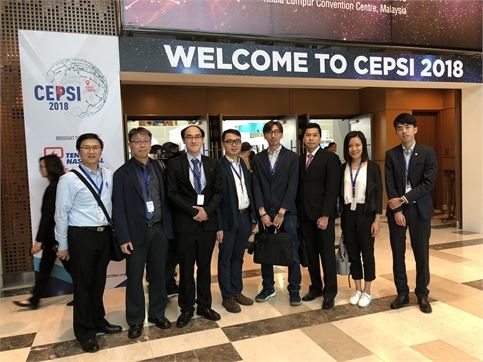 An 8-member delegation of Companhia de Electricidade de Macau – CEM. S.A. (CEM) attended the 22th Conference of the Electric Power Supply Industry (CEPSI 2018), which was held at the Kuala Lumpur Convention Centre (KLCC) in Malaysia last week (17th to 22nd September). Being an important event for the power industry in Asia, CEPSI is organized biennially by the Association of the Electricity Supply Industry of East Asia and the Western Pacific (AESIEAP) as well as member countries or regions by turns. This time, the Conference is hosted by Tenaga Nasional Berhad. CEPSI aims to provide a platform for knowledge exchange and cooperation for the power industry in the Asia-Pacific region, sharing research findings related to the industry and further promote technological development in various regions.

The theme of CEPSI 2018 is "Reimagining Utility of the Future", which explores how power companies should transform in response to the current rapid innovation in technology, changing economic environments, increasing sustainability standards, regulatory requirements and customer expectations. Over 1,500 power-related delegates from more than 30 countries attended the Conference, including corporate executives, analysts, consultants, engineers, industry professionals and government officials etc., to discuss and exchange views on the hot topics of global concern such as digitalization, smart future, Big Data, sustainability and energy trilemma.

CEM expressed that the development of smart cities has become a global trend. In the face of the digital era, power companies should keep pace with the times and give full play to the advantages brought by technology. For example, the smart streetlight system that has been introduced all over the world in recent years has features such as power supply, network connection and wide distribution. These features can lay a good foundation for the Internet of Things in the future, creating a smart environment of technology integration. CEPSI provides an excellent opportunity for power companies in the region to explore, exchange knowledge and learn from each other's experiences on the implementation of smart technology in the industry.