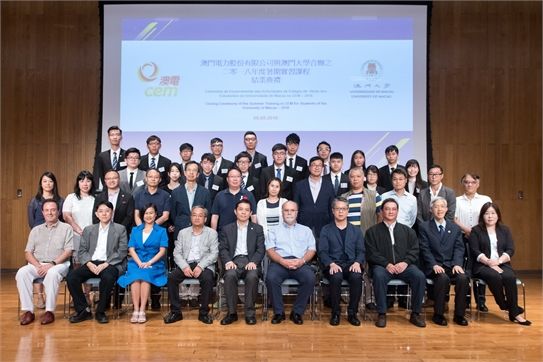 The Summer Training Program organized by Companhia de Electricidade de Macau – CEM, S.A. (CEM) for students from the University of Macau (UM) was completed with a success, a closing ceremony was held at the Theatre of the Students Activity Centre in the UM Hengqin campus recently. Professors from different UM faculties and Directors from CEM various departments were invited to attend the ceremony. The ceremony was officiated by CEM Executive Committee Principal Advisor Benjamin Yue and UM Vice Rector Professor Rui Martins. Certificates were awarded to 19 trainees during the ceremony for recognizing their efforts devoted in this program.

Benjamin Yue expressed his gratitude to all the management members and UM professors, as well as CEM tutors for giving support and cooperation to the students which contribute to the success of this program. CEM has always been playing an active role in nurturing local talents. Since the launch of the Summer Training Program in 1991 with the cooperation agreement established with UM, CEM has offered internship opportunities to more than 600 students, to let students gain work experience, develop self-independence and broaden their vision through experiential learning.

This year, there was a total of 19 UM students from different faculties participated in the Summer Training Program among 8 different departments according to their academic majors. Students felt honored to take part in CEM Summer Training Program, which provided them opportunities to understand the operation of a company, gain extracurricular knowledge, and be well-equipped in the future to integrate into the society.