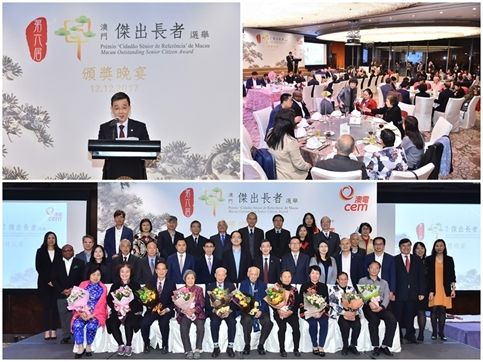 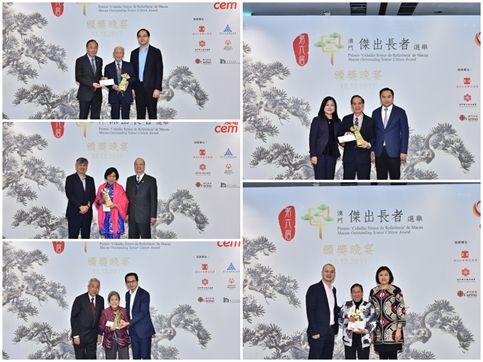 CEM has organized the “Macau Outstanding Senior Citizen Award” starting from 2012, with the aim of recognizing senior citizens for their hearty services to the public, and encouraging senior citizens to share their life experiences and knowledge with others, set examples for the young people, face life with positive attitudes and shoulder responsibilities. The event is co-organized by the Macau Federation of Trade Unions, General Residents Association of Macau, Women’s General Association of Macau, Caritas Macau, Macau Special Olympics and Fu Hong Society of Macau. The Award Presentation Ceremony of the 6th Macau Outstanding Senior Citizen Award was held at Mandarin Oriental Macau on December 12 evening and ten winners were awarded.

Shi Yulin, CEM Executive Director, congratulated the winning elders and expressed gratitude to the co-organizers for their support. Shi said the winners have accomplished major personal achievements, made great contributions to families and communities, and exemplified the spirit of ’old and capable’. With their good attitude and positivity they have been the role models for the young people. He hoped the recognition from Macau Outstanding Senior Citizen Award will help keep up their passion and energy, and encourage them to continue to excel in their talented areas.

At the award presentation ceremony, each winner received a trophy and MOP 5,000 in cash rewards from the officiating guests. The outstanding senior citizens were invited to demonstrate their talents, including Chinese painting, Cantonese opera, Putonghua singing, English singing and Chinese dancing. Senior citizen Wong Chi Seng demonstrated satellite signals receiving and amateur radio direction finding on the scene and invited guests to experience the finding activity. The Award Ceremony, which was wrapped up with the wonderful performances of the elders.