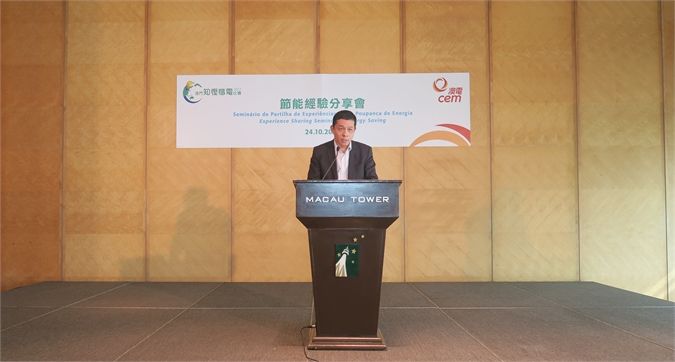 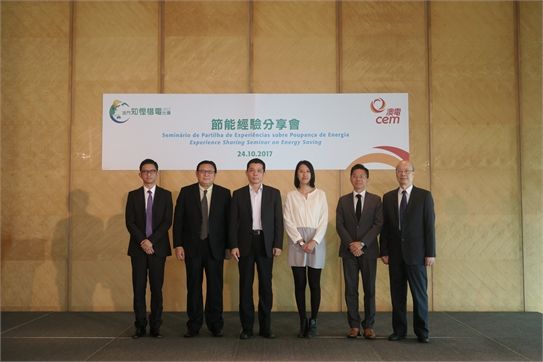 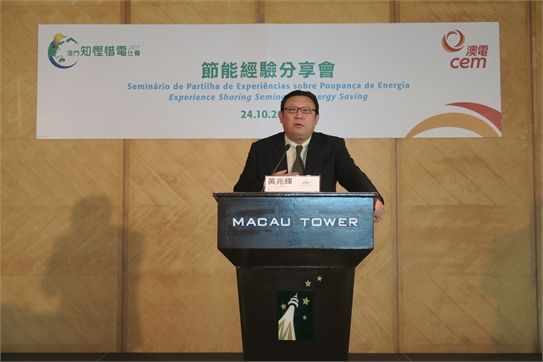 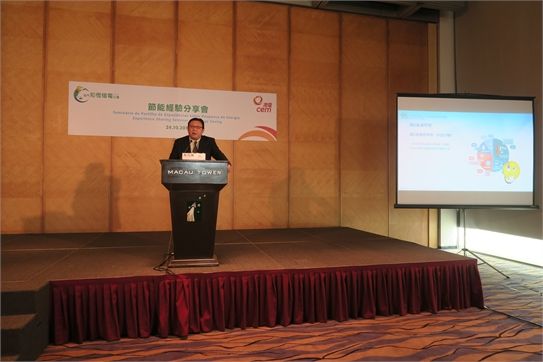 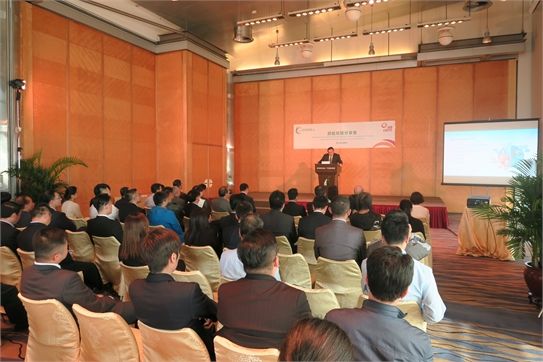 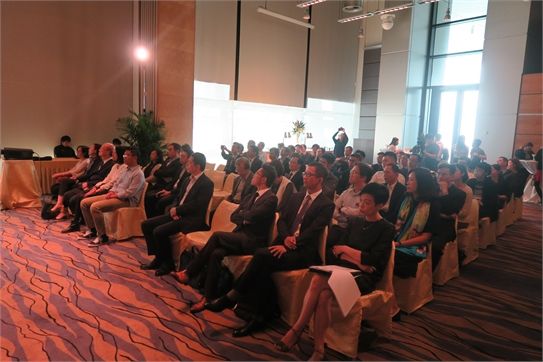 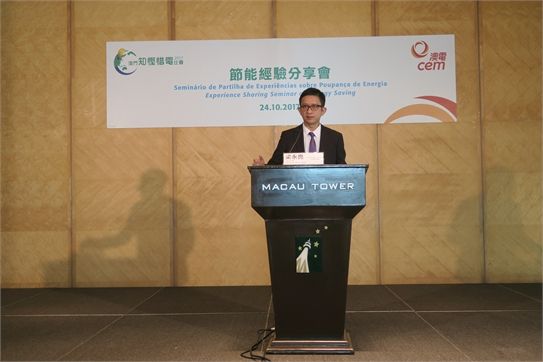 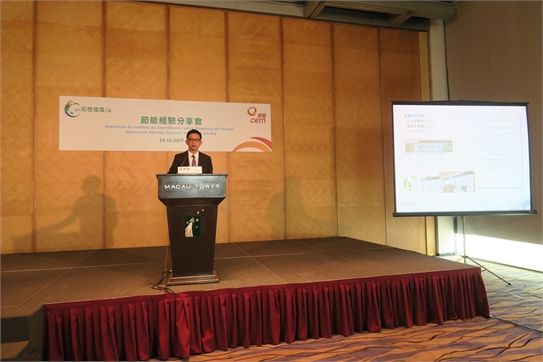 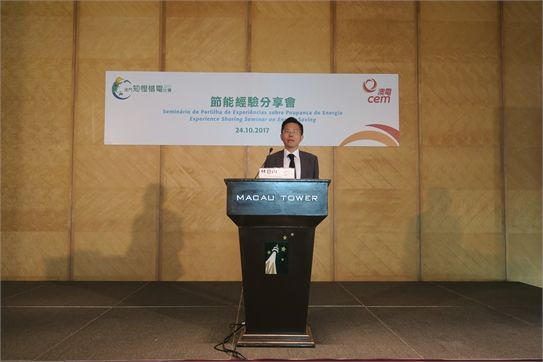 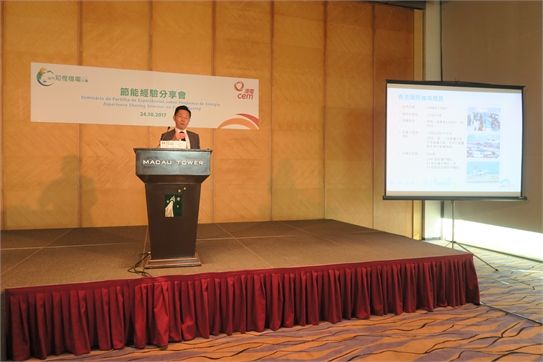 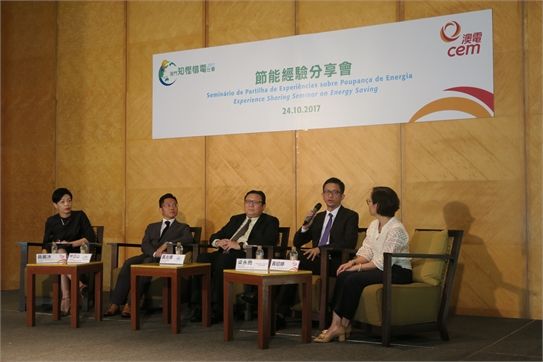 To encourage Macau residents as well as property management and hotel industry to conserve energy, CEM has partnered with Office for the Development of Energy Sector of Macau SAR (GDSE) to hold Macau Energy Saving Contest since 2009. This activity has helped Macau save 154 million kWh of electricity over a period of eight years. A total of 46 hotels and 357 buildings participated in the activity this year. To align with the Energy Saving Contest launched for promoting the message on energy saving, CEM held the “Experience Sharing Seminar on Energy Conservation” on October 24 on the fourth floor of Macau Tower, during which three experts from the Hong Kong Energy Conservation Association, Miramar Group and Hong Kong International Airport shared their knowledge and experience on energy conservation with representatives from the hotel industry in Macau. Over 60 participants from the hotel industry attended the seminar.

In his speech, Benjamin Yue said that as Macau receives tens of millions of visitors each year, with several large-scale hotel projects to be completed and round-the-clock hotel operation carried out, there is a huge demand for power. As a result, power consumption in the region has continuously hit record highs. For many years, many hotels have attached great importance to promoting environmental protection and adopted various energy-saving measures to reduce power consumption and lower carbon emissions so as to contribute to building a green Macau. Benjamin Yue hoped that the hotel industry could stand in unison regarding the promotion of energy conservation to make Macau a greener and healthier city.

Steve Wong said the high-tech smart lighting system allowed the application of Internet of Things (IoT) to hotel environment and operation. This can help hotels save energy consumption by nearly 50%, as well as learn about the past and present energy consumption patterns, enabling them to seek energy conservation in rooms in terms of aspects involving time, space, resource occupancy ratio and ultimate use of energy, as well as make decisions with regards to the implementation of eco-friendly technologies. Hotels can formulate dedicated energy management policies to improve energy and operational efficiency, thereby lowering operating costs. When energy efficiency management becomes part of hotels’ culture, the concepts of sustainable development can be implemented more effectively.

Wilson Leung introduced the green management model and environmental policy of Miramar Group. Thanks to various energy-saving measures, power consumption at the phase one and building A of Mira Place dropped 43% from 2012 in 2016. Since 2012, Miramar Group has improved its intelligent building management system (IBMS) and used meter online service. The group has conducted energy review and established the ISO 50001 Energy Management System in 2013 as well as completed the first and second-phase of the central chiller plant transformation project in 2014 and 2015, respectively. The group has also improved its lighting system and the IBMS in 2016, saving more than 10 million kWh of electricity in total.

Joseph Lam said that Hong Kong International Airport has pledged in 2010 to cut carbon emissions per unit of work by 25% in 2015, being the first airport in the world to pledge to reduce carbon emissions in the entire airport community. During the period, the airport has installed more than 100,000 LED lights, improved its cooling systems and introduced electric vehicles and charging facilities. Hong Kong International Airport had reduced carbon intensity by 25.6% per workload unit by 2015, as compared with the 2008 level. This achievement surpassed the original target of reducing carbon intensity by 25%, set in 2010. Meanwhile, Airport Authority Hong Kong (AA) and its airport business partners also announced a new 10% reduction target as compared with the 2015 level for the five-year period from 2016 to 2020. Some of the key initiatives for the AA include the replacement of over 80,000 LED lights at Terminal 1 to further enhance energy efficiency, optimizing the energy consumption of Midfield Concourse, and the conversion of apron high-mast lighting to LED light sources as well as developing smart and quick charging solutions for electric vehicles.