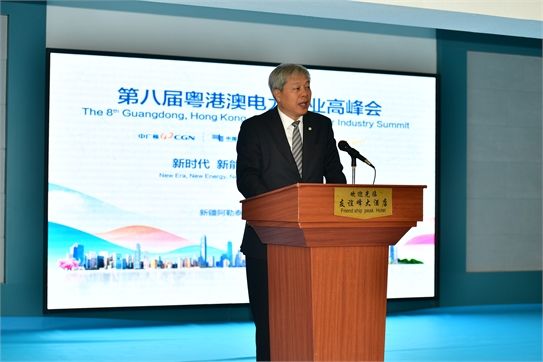 Organized by China General Nuclear Power Corporation (CGN), the 8th “Guangdong, Hong Kong and Macau Power Industry Summit” was held in Burqin County, Altay, Xinjiang on 26 July. The Summit was initiated by China Southern Power Grid Company Limited (CSG), and the first Summit was held in Macau in September 2011 with the support of CLP Holdings Limited (CLP) and Companhia de Electricidade de Macau – CEM. S.A. (CEM). The Summit was later joined by CGN in 2012. It is an important platform to push forward cooperation between power enterprises in Guangdong, Hong Kong and Macau and the complementarity of power resources in the region.

Executives of the four companies attending the Summit included Li Qingkui, Chairman of CSG; Richard Lancaster, Chief Executive Officer of CLP; He Yu, Board Chairman of CGN, and Fu Jianguo, Chairman of the Board of Directors of CEM. The Summit this year was themed on “New Era, New Energy, New Development, New Progress”.

In his speech, Fu Jianguo said that energy is the driving force in economic and social development as well as the catalyzer of civilization. The extensive use of fossil fuels such as coal and oil has pushed human society to evolve from a fishing, hunting and gathering civilization to an agricultural civilization and further to an industrial civilization, but has also brought a series of severe challenges such as environmental pollution and climate change. Resources and environmental constraints have become a worldwide problem restricting the sustainable development of human society. How to resolve the problem and accelerate the transformation into clean, low-carbon, smart and efficient new energy has become a globally important strategic initiative. As the world’s biggest energy producer and consumer, China is driving the energy transformation and reform, an initiative that is in line with the global trend and is also meeting the demand of its own sustainable development. Driven by the new energy technologies, information technologies and global pressure of carbon emission reduction, green and low-carbon energy is bound to carry the day in the future, the production and consumption model will be highly intelligent, and clean energy will inevitably become the major energy in the future.

Fu Jianguo said the headquarters of the four participating power companies are all located in the heartland of Guangdong-Hong Kong-Macau Greater Bay Area, which is China’s major power consuming area, and also an important production base for high-end power equipment. With the construction of Guangdong-Hong Kong-Macau Greater Bay Area, he hoped the four power companies in the three regions could work together and play their exemplary roles in the course of green energy transformation. He expected the companies to forge a stronger and closer relationship through the Summit, providing a new impetus for the power sector’s green, high-efficient and sustainable development and pushing ahead the new way of serving the power industry development in Guangdong-Hong Kong-Macau Greater Bay Area.

CGN invited Zhang Yansheng, Chief Researcher of China Center for International Economic Exchanges, and Guo Wanda, Executive Vice President of China Development Institute (Shenzhen), to share their insights on the topics of “Expanding opening up and deepening cooperation: China's determination and confidence” and “Prospects of planning for Guangdong-Hong Kong-Macau Greater Bay Area and opportunities and challenges for energy companies" at the Summit, in a bid to inspire and guide other participants to discuss and share their views on the topic.

Apart from the sharing session, the organizer also arranged visits and study tours. The participants visited Altay wind farm, the independent photovoltaic power generation project in areas without access to electricity, and the water conservancy project in the waterless areas in Altay. CGN’s wind farm in Altay, which is 80 kilometers away from the urban areas of Altay, has a planned capacity of 4.95MW and an installed capacity of 49,500kW, with 33 wind turbines of 1,500 kW each. The wind farm covers an area of about 10 square kilometers in total, and can produce 120 million kilowatt-hours of clean electricity every year. The independent photovoltaic power generation project in Altay has addressed the electricity needs of 24,611 people in 6,197 households in the areas without access to electricity, playing a positive role in improving the quality of life of farmers and herdsmen.