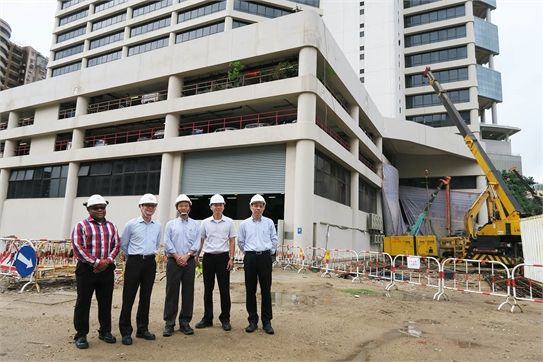 The Macau Power Station (CMC) demolition work commenced in January 2017 is now nearly complete. To monitor the progress of the final phase, Horry Hoi, Director of Office for the Development of the Energy Sector (GDSE) visited the CMC for site inspection.

Accompanied by Bernie Leong, Chairman of the Executive Committee of CEM and Benjamin Yue, Principal Advisor of the Executive Committee of CEM, Horry Hoi first arrived at the roof terrace of CEM Building to overlook the CMC site, then proceeded to the site for inspection. During the inspection, Horry Hui was briefed on the work progress by the relevant engineers from CEM. The process of the entire demolition project has been in line with standards of safety and quality. Besides the underground drainage and ground floor structure, all buildings had been demolished. CEM completed the project successfully as originally planned.

CMC has served Macau for over 110 years. Few years ago Macau SAR Government discussed with CEM about the returning of land of the decommissioned power station to the Government for public housing development, and CEM would be responsible for the entire demolition project. The size of CMC is approximately 18,540 m². The Decommissioning, Decontamination and Demolition (DDD) project scope includes the tank farm, oily water system, chemical store and water tanks, fuel oil treatment plant, chimneys, auxiliary boiler, firefighting station, cooling tower, gas turbines, control building, cable and pipe trenches, engine rooms, fuel oil pipe, lube oil pipe, diesel oil pipe and the off-site oil pipelines between CMC and the pier located at Avenida da Amizade. The most difficult part is the removal of the 101-meter-high chimney, which took four months to complete. It is believed to be the highest demolition work ever carried out in Macau.

CEM has always been concerned about environmental protection and has taken into consideration the fact that CMC is located in residential area. To protect the environment and the health of residents in accordance with the relevant statutory environmental requirements, CEM hired qualified asbestos removal contractors to take charge of the asbestos removal works and reduced the possibility of discharging contaminated soil during the process by taking the mitigation measures recommended in the Environmental Impact Assessment Report. In addition, CEM set up air quality and noise monitoring equipment on site and submitted environmental reports to the Environmental Protection Bureau of Macau SAR (DSPA) on a monthly basis. To report on the demolition progress, regular monthly meetings with DSPA and GDSE were also held. All monitoring data are uploaded to CEM Website weekly for public viewing.