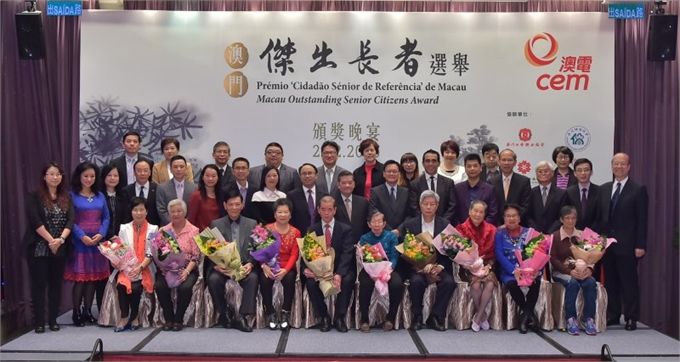 CEM has been organizing the Macau Outstanding Senior Citizens Award since 2012 to recognize the contributions made by the elders, with the aim to encourage elders to actively participate in public welfare activities and make contributions to society and set a good example for the next generation. This year CEM held the event again together with the co-organizers of Macau Federation of Trade Unions, General Residents Association of Macau, Women’s General Association of Macau, the Association of Returned Overseas Chinese Macau, Caritas Macau, Macau Special Olympics and Fuhong Society of Macau. The fourth edition of “Macau Outstanding Senior Citizens Award” presentation ceremony was held at StarWorld Hotel on 2 December to award prizes to the elected elders.

In addition to receiving a trophy and MOP5,000 cash prize, the ten winners of the “Macau Outstanding Senior Citizens Award” were invited to share their valuable life experiences. Meanwhile, multi-talented elders also presented performances such as singing, Qigong and Tai Chi Fan, adding to joyful atmosphere to the award presentation ceremony. CEM always cares for the society, particularly the living of senior citizens. Since 2000, CEM’s voluntary technical staff have been utilizing their skills to provide free safety checks and replace substandard plugs for elder citizens living alone, in a bid to safeguard their electrical safety and promote energy conservation. Recently, CEM helped elder citizens replace their lightings with LED lights for energy saving. Till now there have been 350 elders benefited from this scheme. In addition, CEM has been holding annual lunch gathering in front of Pak Tai Temple since 2004 to treat and thank 300 elders from Taipa and Coloane for their contributions to the society. In 2015, CEM launched the “CEM Ambassadors 1+1 Elderly Program” for the first time, which pairs one CEM Ambassador with one elderly. Through regular telephone calls and home visits, the program aims to help solitary elders to relieve their loneliness and let them feel being loved and cared.