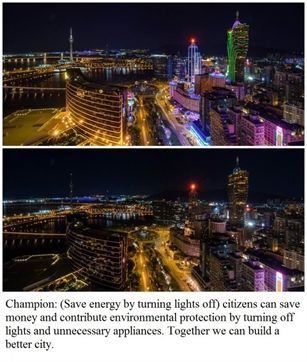 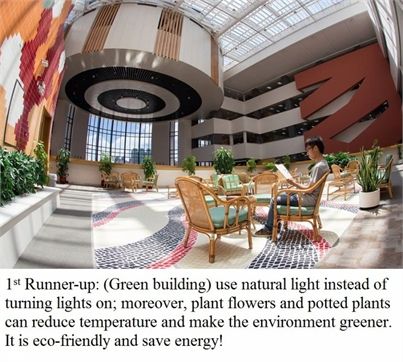 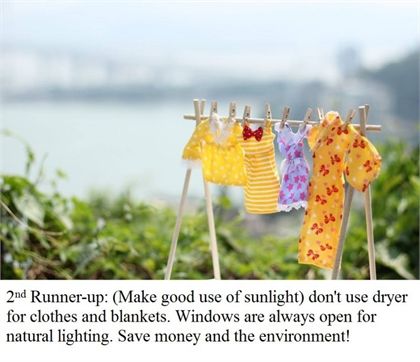 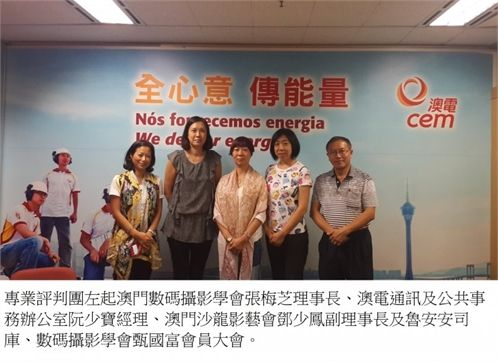 In a bid to enhance Macau citizens’ awareness on energy conservation and understand the importance of treasuring resources, Companhia de Electricidade de Macau (CEM) launched the “Energy Saving Snapshot Contest” in July. Citizens were encouraged to discover various energy saving practices from close observation of their daily lives and share tips on Facebook. Macao Digital Photography Association and The Photography Salon Society of Macao were invited to act as the Contest’s co-organizers. The Contest received very good responses from public with nearly 300 entries.

Judging comprised two parts: professional judging (70%) and public voting (30%). Professional judging was held on 18 September, with a judging panel consisting of Yen Kuacfu, President of General Assembly and Gigi Cheong, President Board of Directors, from Macao Digital Photography Association; Tang Sio Fong, Deputy Chairman of Council and Diana Lou, Treasurer, from The Photography Salon Society of Macao, as well as Jaclyn Iun, Manager of CEM Communications and Public Affairs Office. Professional judging was based on four criteria: expression of the theme, framing and choice of viewpoint, originality, and visual impact. The champion, first runner-up and second runner-up will be awarded cash prices of MOP6,000, MOP4,000 and MOP3,000, respectively. In terms of public voting, citizens can vote by clicking “Like” on CEM’s “Macau Energy Saving Contest” Facebook fan page (www.facebook.com/energysavin...). Apart from appreciating energy saving photos, citizens can learn many different daily energy saving tips and knowledge. The entry with the most “Like” will be the winner of “My Favorite Eco-photo” and the entrant will be awarded with an Apple Watch Sport. In addition, CEM will select three lucky voters via a draw, each of them will receive a cash prize of MOP1,000.

The judging panel said that the Contest entries reflected the increased awareness on energy saving among Macau citizens. Through the Contest, citizens can find how simple it is to save energy, energy saving acts could be spotted anywhere at any given time.

Jaclyn Iun expressed that everyone should bear the responsibility of saving energy and carry out energy conservation in their daily lives. CEM has been encouraging citizens to save energy and imparting energy saving knowledge through organizing different kinds of activities via various channels. The Contest combined nowadays young people’s mobile phone usage pattern of taking snapshots to record the moment and instantly sharing photos and moods on social networking platform. CEM hopes that the Contest can convey the message of energy saving to the younger generations.

Deadline of submission ended on 15 September, while public voting was on 30 September. All winners are listed as follow:

Champion Li Man Lok, first runner-up Lei Keng Hong and second runner-up Jessica Lorilla Domingo, will be awarded MOP6,000, MOP4,000 and MOP3,000, respectively. After scrutinizing all the votes, the winner of “My Favorite Eco-photo” is Rocky Fong, who will receive with an Apple Watch Sport. The draw for lucky voters was undertaken recently with the witness of the Gaming Inspection and Coordination Bureau. The three lucky voters are: Mona Lam, Sui Lin Esther Fung, and Noemie Lok. Each of them will receive a cash prize of MOP1,000.

Results of the Contest have been uploaded to CEM’s website www.cem-macau.com and “Macau Energy Saving Contest” Facebook fan page. Winners will be notified individually. The award ceremony will be held late October.