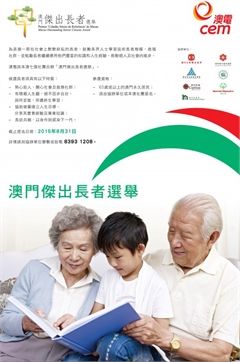 CEM has been hosting the “Macau Outstanding Senior Citizens Award” ever since 2012 in recognition of the contributions made by the elderly to the society and their families, as well as to encourage elders to make good use of their leisure time, and actively participate in community services. With positive feedbacks from the public, CEM will continue to host the event this year to further honor the outstanding seniors of Macau.

The “Macau Outstanding Senior Citizens Award” is now open for nominations until 31 August. Eligible candidates must be Macau permanent residents, aged 65-years-old or above, and should be referred or nominated by a co-organizer or a local association.

Candidates, whether female or male, may come from various sectors in the community. Ten winners will be selected by the judging panel in a fair and impartial manner. The award ceremony will be held at the end of this year, where each winner will be given a trophy and a cash prize of MOP 5,000.

Rules and nomination forms for the award can be found on CEM website at www.cem-macau.com.