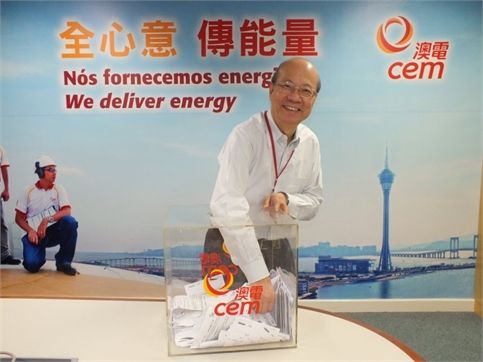 Since CEM launched the Energizing Tour in 2009, more than 25,000 people have already visited Coloane Power Station, including schools, local associations, and companies, public at large and even groups from overseas. Through this visit citizens have the chance to have a close up to the local generation process and the main local generation infrastructures as well as have a better understanding of CEM operations and services.

During the visit, participants are invited to provide feedback about the Tour’s itinerary by filling a questionnaire, with the chance to win attractive prizes. Among all questionnaires received, one MOP2,000 electrical appliances cash coupon will be offered every quarter. Also every quarter, the best comment is selected from all the feedback received. Winner receives a MOP300 supermarket cash coupon. Also an Energy-Quiz featuring energy savings concept is launched quarterly in CEM Energizing Tour Facebook fan page. Among all the participants who answer correctly to the Quiz, three of them receive a MOP300 supermarket cash coupon. Plus, five from all new Facebook fans who “LIKED” the page will receive a MOP500 supermarket cash coupon in the year-end.

Lucky draw of the second quarter took place on 8 July at CEM Headquarter and witnessed by a representative from the Gaming Inspection and Coordination Bureau, and the results are:

Winner of the MOP2,000 electrical appliances cash coupon is Cheong Chi Ian. Winner of the ‘Best Comment’ is Chan Fong who said “Organize more students and youth groups to participate in your Tour. Energy saving should be educated since childhood” won a MOP300 supermarket cash coupon. The second quarter Energy-Quiz question was ‘How much longer the lifespan of a LED bulb lasts in comparison with an incandescent light bulb?’, and the answer is ‘40 times longer’. The three lucky winners are ’Sanna Wong’, ‘Leong Cho Weng’ and ’Cheong Un Si’ who will get a MOP300 supermarket cash coupon each. All winners will be notified by CEM individually.

Energizing Tours are conducted during weekdays for schools and local associations, from 10:00am to 12:30pm (morning session) or 2:30pm to 5:00pm (afternoon session). Public Tours are conducted every first and third Saturdays of each month (until December 2015), in the same schedule. For enrolment, citizens can simply call 8393 1202.