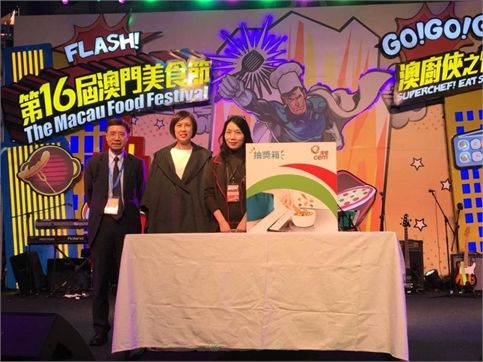 With the advantages of safer, faster and more convenient, induction cookers are very suitable for household usage. Induction cooker makes use of electro-magnetic induction to heat the bottom of a cookware directly, boasting heat efficiency of 85% and one-third shorter cooking time than flame cooking, which contributes to an energy reduction of 30% to 45%, thus saving time and money. Moreover, induction cooker can solve the problem of heat diffusion, thus lowering the kitchen temperature by 4-5oC and producing less noise and smoke. Cooking in a cool and comfortable kitchen is proficient and enjoyable.

The Lucky Draw received overwhelming response. The drawing ceremony was held earlier in the Festival venue, presided by Lei U Weng and Elizabeth Chung, Chairman and Standing Director of Food and Beverage Merchants of Macau; Jaclyn Iun, Manager of CEM Communications and Public Affairs Office. Each of the winners will receive one single-zone induction cooker respectively plus a cookbook that includes all dishes made by the finalists of “Healthy Eating” Induction Cooking Contest.