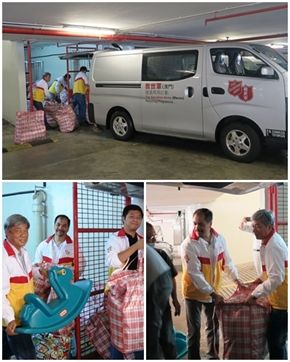 In order to adhere the principle of environmental protection and resource conservation, as well as to encourage staff to proactively support and care the vulnerable groups, Companhia de Electricidade de Macau - CEM, S.A. (CEM) collaborated with the Salvation Army for the fourth year to collect the used clothes, toys and books in July and August. The collection campaign has received overwhelming support from staff, and the volume of clothes and toys collected has reached the highest ever over the years with the assistance of the CEM Ambassadors Team members.

Iun Iok Meng said that the volume of clothes and toys collected in this collection campaign is the highest over the years. While the staff can help people in need, items they accumulated at home can also be recycled. CEM has proactively supported the work on environmental protection by promoting the green office culture. To encourage citizens to make their own contributions to environmental protection, CEM organizes and participates in various activities including the Macao International Environmental Cooperation Forum & Exhibition, Macau Energy Saving Contest, Experience Life without Electricity Camp, CEM Energy Fun Fair, Solar & Capacitance Model Car Races and so forth. Through the series of activities, CEM hopes to foster learning and implementing the environmental protection practices.

Ronald Ho expressed his gratitude towards the generous donation from CEM staff, and said that the Salvation Army will help the vulnerable groups through donating and reselling the items. He hopes that more companies in Macau can organize donation campaigns spontaneously to support the Salvation Army and help others.