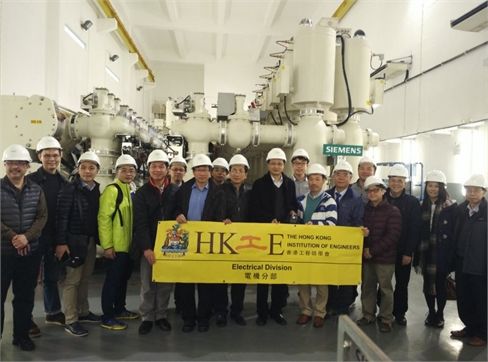 CEM received the visit of a delegation of the Hong Kong Institution of Engineers’ (HKIE) Electrical Division Committee on 12 March, aiming at introducing the technical developments applied in the Macau electrical networks system. The delegation visited CEM’s 220kV Lotus Substation, and was accompanied by Billy Chan, CEM Transmission and Distribution Department Senior Manager, as well as Unit Head, Vincent Lam, and other CEM representatives.

The 220kV Lotus Substation and the 220kV backbone Lotus Interconnection was put into service in 2012. This second interconnection with Guangdong Power Grid was very important to allow further additional importation to the grid, contributing to improve the network security and reliability and playing a positive and stabilizing role in the medium-to-long power consumption in Macau.

HKIE sets standards for the training and admission of engineers. It has strict rules governing the conduct of its members and, as a learned society, it enables its members to keep abreast of the latest developments in engineering. HKIE plays an important engineering leading position in HK, with some of its members being at managerial position of important entities, such as China Light & Power (CLP), Hong Kong Electric (HKE) and the Electrical and Mechanical Services Department (EMSD). Through these visits it is aimed at strengthening communication as well as information, knowledge and experience exchange between the members in the power industry.

In 2015, CEM allocated almost 78% of its investment to further improve and expand its infrastructure. The construction and maintenance of power transmission and distribution networks are vital to the stability of power supply. Multiple new substations were set up and put into operation last year, including the Depot Primary Substation in Cotai built for the LRT System, Ilha Verde Primary Substation, Wynn Macau and The Parisian Switching Substations. A number of transmission and distribution infrastructure projects will be kicked off in succession in 2016 including the new Dispatch Centre Building project and three new high-voltage substations at Hospital das Ilhas, Hospital Conde S. Januário, and artificial island of the Hong Kong-Zhuhai-Macau Bridge. As the third interconnection linking the Lotus Substation with the China Southern Power Grid (CSG) was put into operation in August 2015, interconnection between CEM and CSG network is further enhanced. CEM will continuously invest in critical infrastructures to support the development of Macau and meet the growing electricity demand due to the development of the society to provide stable and quality services to its customers.