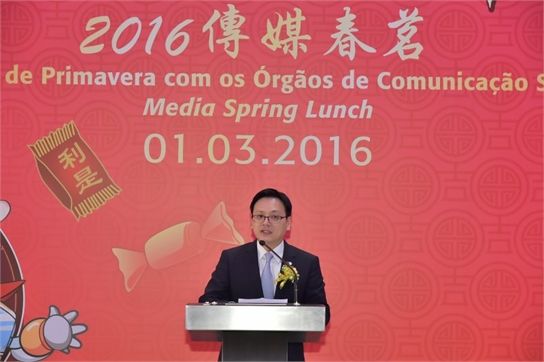 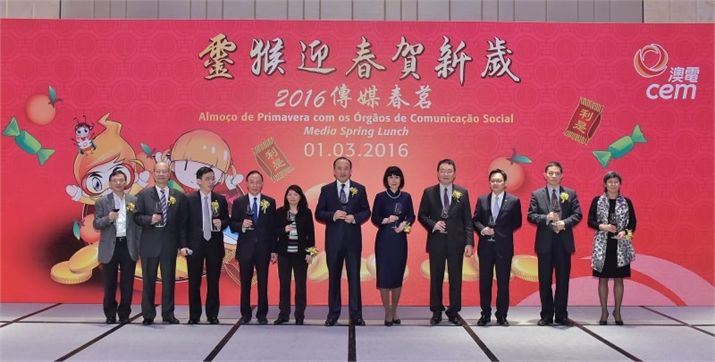 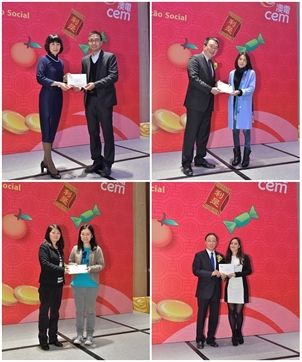 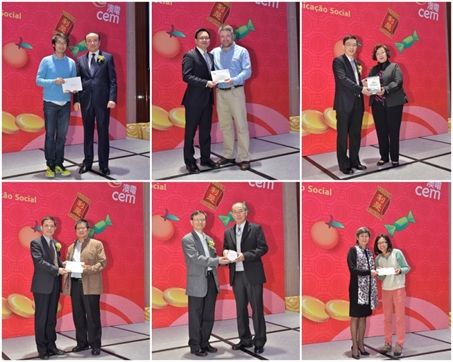 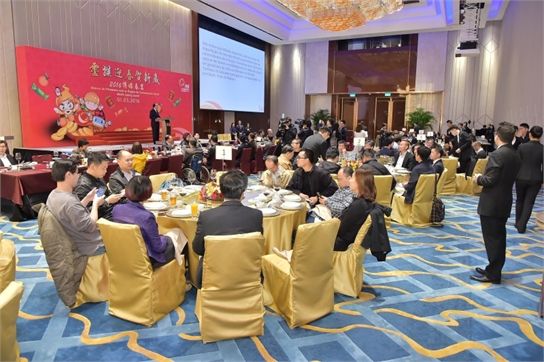 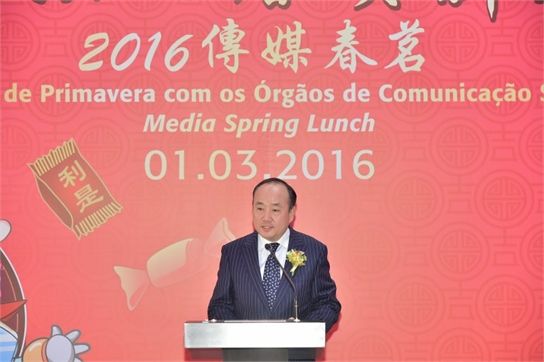 In recognition of the media’s support for CEM over the past year, Companhia de Electricidade de Macau - CEM, S.A. (CEM) hosted Media Spring Lunch at JW Marriott Hotel Macau on 1 March 2016 to celebrate Chinese New Year. Macau media representatives as well as Zhu Hong, Deputy Director of the Economic Affairs Department of the Liaison Office of the Central People’s Government in the Macau SAR; Victor Chan, Director of Government Information Bureau; Echo Lio, Senior Technical Consultant of the Office for the Development of Energy Sector; Vong Kok Seng, President of the Customer Liaison Committee, were invited to attend the event.

Xu Kaicheng, Chairman of the Board of Directors, expressed that 2015 was a challenging year for Macau. The local economy encountered a slowdown, however, CEM still maintained stable growth in its business performance with the effort of management and employees. Power consumption continued to hit a new high, with a growth of 6.2% year on year. Under the support of the Macau SAR Government, CEM received an approved amount of MOP980 million for the 2016 Annual Development Plan. CEM will continuously invest in critical infrastructure to support the development of Macau and meet the growing electricity demand due to the development of the society to provide stable and quality services to customers.

Bernie Leong, Chairman of CEM Executive Committee, reported the results of CEM performance and introduced the future investment plan to the attending guests. Since fuel prices dropped significantly in late 2015, resulting in the local generation cost lower than importation, thus CEM generated 753GWh of electricity locally last year, up 73% from that of 2014. On the other hand, 4,055GWh of electricity was imported from mainland to Macau, down 1.1% from that of 2014 and the first ever negative growth. Yet, it still contributed to 81.6% of Macau’s electricity consumption.

In light of the serious aging of some of the generators, CEM has been in negotiations with the Macau Government to replace some obsolete and inefficient diesel power generation units with eco-friendly and efficient gas turbine units, which would be crucial for retaining the power generation capacity of Macau to increase Macau’s bargaining power as well as boost the safety of Macau’s power supply. The use of natural gas for power generation can also help reduce gas emission. In the prospect of 2016, CEM will revise the 5-year grid development master plan. CEM will invest about MOP680 million in the approved large infrastructure projects, including high-voltage substations at Cotai Healthcare Complex, Hospital Conde S. Januário and the Hong Kong-Zhuhai-Macau Bridge Island, as well as other investments in transmission and distribution grids.

The new Dispatch Centre project was approved by the Macau SAR Government in 2015. The Centre will be located at the Coloane Power Station, as CEM’s first green operating centre building with LEED certification. In addition, to strengthen our communication with customers and improve our frontline operating efficiency, multiple customer services will be refined, including the upgrade and re-launch of current App of CEM, the debut of new multi-function self-service kiosk at service centers. The electromechanical meter replacement plan is expected to be completed in 2017.

CEM has been dedicated to providing citizens with stable and high-quality power supply. Apart from that, CEM has also attached great importance to the fulfillment of corporate social responsibility, in order to express care to social groups and to make contributions to society. CEM organized a series of activities in 2015 to show care for vulnerable social groups and promote energy conservation, such as “Community Programme”, “Macau Outstanding Senior Citizens Award”, “CEM Brightening Stars” internship program, “CEM Ambassadors 1+1 Elderly Program”, “Healthy Eating” Induction Cooking Contest, “Once Week @ CEM”, “Energy Saving Snapshot Contest”, and so forth. Media is an important channel for CEM to communicate with citizens. CEM is grateful for media’s long-standing support and assistance in sharing information about electricity services with local citizens, so as to enhance citizens’ awareness of electricity safety and environmental protection.