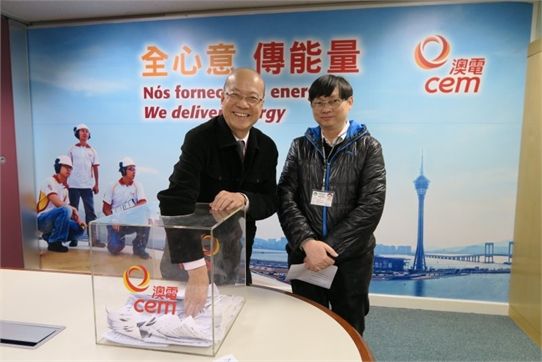 CEM Energizing Tour was first launched in 2009, aiming at allowing Macau citizens to have a better understanding of CEM major operations and services and to have a closer look at the local power generation process. Since then it attracted more than 27,000 citizens to visit Coloane Power Station. In 2015 alone, nearly 80 tours were conducted with more than 3,000 visitors participating.

Tours included a visit to CEM Exhibition Room featuring a display of electrical appliances with more than 50 years, old equipment from CEM operational departments, information about the Company’s milestones and the local generation process; also included in the Tour a site visit to major generation facilities and control rooms.

To encourage the visitors to provide feedback on the Tour, a lucky draw was launched, with an electrical appliances coupon of MOP2,000 to be offered to one lucky winner every quarter. Plus, the best comment was selected from all the feedback received in every quarter as well. Winner received a MOP300 supermarket cash coupon.

As social media is now an important means of communication and interaction with the customers, an Energy-Quiz featuring energy savings concept was launched quarterly in CEM Energizing Tour Facebook fan page (www.facebook.com/Energizing.Tour/). All the participants who answered the quiz correctly entered a lucky draw automatically, three of them received a MOP300 supermarket cash coupon, each quarter.

Quizzes triggered an enthusiastic response, with nearly 600 participations received. In addition, five out of all new Facebook fans who “LIKED” the page in 2015 received each a MOP500 supermarket cash coupon.

Lucky draw took place on 14 January 2016 at CEM Headquarter with the supervision of a representative of the Gaming Inspection and Coordination Bureau, and the results are: Winner of the 4th quarter MOP2,000 electrical appliances cash coupon is Lei Sin Heng.

The 4th quarter Energy-Quiz question was ‘Why you should not leave your appliances on standby mode?’, and the answer is ‘Because it continues to consume a significant amount of energy’. The three lucky winners of the Quiz are ‘Gigi Lei’, ‘Car Ku’ and ‘Black Leong’ who will get a MOP300 supermarket cash coupon each. The five new Facebook fans winning each a MOP500 supermarket cash coupon are Yuki Ho, Lcheng Pun, Andizinho Ho, Sherry Chen and Alex Cheang. All winners will be notified by CEM individually.