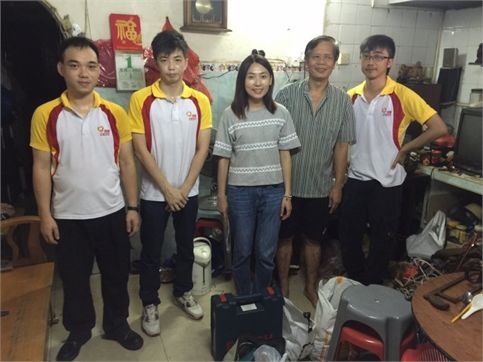 CEM has long endeavored to a culture of social corporate citizenship and proactively supports the community in Macau. In 2000, CEM pioneered to launch the “Community Programme” in which voluntary technical staff provided free of charge safety checks and rewiring of electrical installations for elder citizens living alone, underprivileged families, and citizens with special needs. Last year, CEM extended the scope to install special doorbell flashlights for members of the Macau Deaf Association.

This year the Program has been extended to help the members of the Rehabilitation Center for the Blind, an institution under the social welfare scope of the Macau Holy House of Mercy. CEM volunteers not only perform safety checks but also relocate electrical parts of the electrical installation, such as sockets, wires, so that the members who are visual impaired have better access to these components and live in a safer environment. 12 members of the Center have applied to be included in this initiative. 8 more are expected to join later, in a total of 20 cases.

First batch of upgrades have just been kicked-off. Mr. Leong, one of the members benefiting from the Program said “I feel so happy that CEM came to my house to help enhance my electrical installation’s safety. Not being able to see is always a difficulty to know whether the electrical parts I am touching are in good conditions, and now I feel much safer.”

Ms. Gisela Nunes, General Secretary of Macau Holy House of Mercy expressed her sincere gratitude to CEM for this meaningful cooperation with the Rehabilitation Center for the Blind and for helping the blind citizens in Macau. It is important that blind people are given the opportunity for a complete integration in the community.

Simultaneously, CEM is cooperating with the Peng On Tung Association at northern district to install LED light bulbs in the houses of 13 elder citizens who live by themselves, with the aim to help them further reduce their energy consumption and save money. These elders are acquainted with CEM Ambassadors Team (CAT), who throughout the year will pay visits to them and check for their well-being, a pilot initiative called (CAT 1+1 Elderly Program) launched this year.