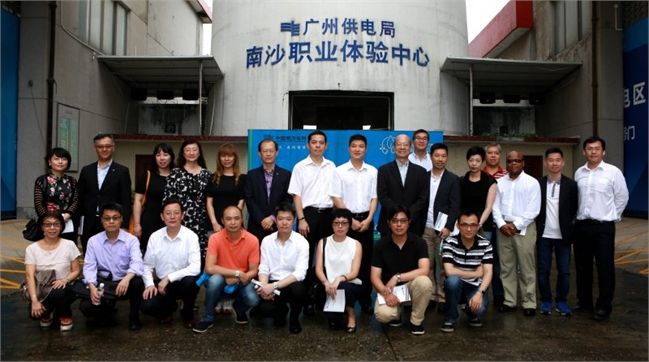 CEM, assisted by the Liaison Office of the Central People’s Government in the Macau SAR, jointly organised the "Guangdong-Macau Economic Cooperation Seminar" for CEM senior management with Guangdong Institute of Public Administration on 15 May, in a bid to allow senior management to better recognize and understand national conditions and policies concerning the Guangdong-Macau economic cooperation. The inauguration ceremony for the seminar was attended by Yang Jianwei, Vice President of Guangdong Institute of Public Administration; Chang Yuxing, Director of the Liaison Office in Macau; as well as CEM Executive Committee Chairman Bernie Leong; Principal Advisor to the Executive Committee Benjamin Yue; and Advisor to the Executive Committtee Iun Iok Meng.

In his speech, Bernie Leong expressed gratitude to the Liaison Office in Macau for its assistance, which enabled CEM to smoothly co-organise the seminar with Guangdong Institute of Public Administration.

Macau’s economy has developed rapidly since the opening-up of the gaming industry, while the ratio of CEM’s energy mix has also changed significantly, i.e., the power input from Guangdong has increased from less than 10% in 2004 to 90% last year, thereby marking the importance of economic cooperation between Guangdong and Macau. Since mid-2014 when Nam Kwong (Group) Company Ltd. became a shareholder of CEM, CEM has entered a new development stage which brought it new opportunities for development.

Bernie Leong held that CEM, which has been rooted in Macau for over 40 years, has given play to its professional team spirit and shouldered responsibilities of supplying stable energy supply and providing excellent customer services to Macau residents. Meanwhile, CEM should take up more social responsibilities as the MSAR Government promotes the “one centre, one platform” policy for pluralistic economic development. “One centre” refers to building Macau into a world centre for leisure and tourism, while “one platform” refers to the services platform for trade cooperation between China and Portuguese-speaking countries. “One centre, one platform” is the future development direction that the central government has set for Macau. Therefore, CEM must fully cooperate with the SAR Government in future development.

Bernie Leong also indicated that the lecture content of CEM’s first “Guangdong-Macau Economic Cooperation Seminar” will touch on the current national situation, economic policies of Macau SAR under the one-country-two-system policy, ways to give play to opportunities from Guangdong-Macau cooperation, outlook for Macau, and so forth. He believed that it will certainly strengthen Macau residents’ understanding of the Chinese motherland, especially in areas that often come in contact with people’s daily lives such as politics, economy, history, and social development. He hopes that members from CEM will benefit from the seminar, learn more about the economic development situation in mainland China, and put what they have learned into use after returning to Macau, in a bid to jointly make contributions to the economic development of China as well as Macau SAR.

The seminar will last for a day and a half, and includes Director Chang Yuxing’s analysis of Macau’s current situation cum introduction of the “Four Hopes” for Macau raised by President Xi Jinping last year; Professor Wang Rihua’s lecture titled “Current International Situation and China’s Diplomatic Strategy”; and Professor Cheng Hongyu’s lecture titled “Guangdong-Macau Cooperation and the Construction of Free Trade Zone”. After the seminar ends at noontime on 17 May, the group of seminar participants will visit Nansha FTA for observation and study under the arrangement made by China Southern Power Grid. They will return to Macau after visiting the Electricity Experience Center in the afternoon.