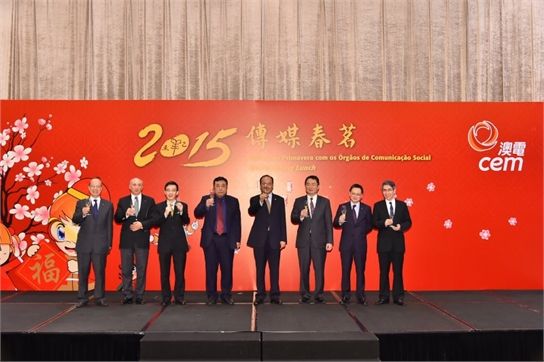 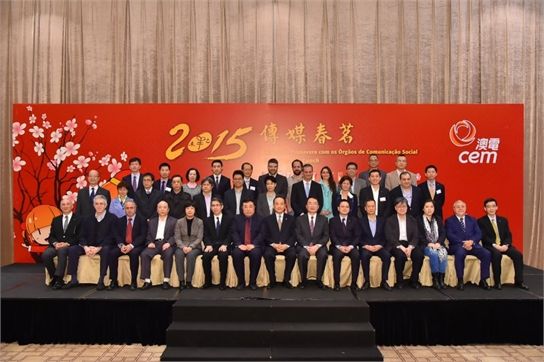 Companhia de Electricidade de Macau, CEM – S.A. (CEM) hosted a Spring Lunch with the media senior executives and frontline reporters to celebrate the Chinese New Year at the Grand Hyatt on March 18, 2015. Chen Xiang, Director of Economic Affairs Department of Liaison Office of the Central People’s Government in the Macau SAR, Victor Chan, Director of Government Information Bureau, Arnaldo Santos, Director of the Office for the Development of the Energy Sector.

Xu Kaicheng, Chairman of the Board of Directors, expressed his gratitude to the media at the luncheon for their long-term support and encouragement which enable CEM to improve its service quality to meet the rising customer requirements. In the future, CEM will continue to work closely with the media to ensure open, timely and effective communications between both parties. CEM will strive to provide to customers with excellent services and continues to be one of the best suppliers in the world for reliable power supply. Therefore, Macau industrial and commercial institutions can operate smoothly, and residents can enjoy high-quality life.

Bernie Leong, Chairman of Executive Committee, stated that 2014 was a significant year for CEM, and he was delighted to have Nam Kwong Group joining CEM as a big family. CEM achieved steady development in 2014, with major projects going well and financial situation more robust, and work targets of the year achieved. For the future development of Macau, CEM submitted an investment proposal valued at more than MOP 1 billion in the annual development plan of 2015. Besides, to strengthen the local power generation capacity, CEM will negotiate with the Macau SAR Government to replace some old inefficient diesel generating sets with eco-friendly and efficient Gas Turbine generating sets.

In 2014, CEM’s Average Service Availability Index (ASAI) of 99.9997% remained among one of the best performers in the world. In addition, MOP539 million was invested in the continuous upgrade and expansion of the transmission and distribution network in 2014. The installation of the third 66/11kV transformer at Concórdia Substation was completed in 2014. Another major project was the LRT project that commenced in 2012, including the construction of new 110kV substations and the installation of the high-voltage cables connecting to CEM’s grid.

In order to sustain excellent supply reliability performance, perfect network and preventive maintenance plans are necessary. CEM invested a total of about MOP100 million in this aspect so as to lengthen the asset life of the overall transmission and distribution network.

Looking into the future, the power demand will continue to grow in Macau. As large-scale projects such as the casino projects in Cotai, the LRT project, and the public housing project roll out, the power consumption will further increase in the coming years. CEM will spare no efforts to ensure safe and stable power supply and serve all citizens in Macau.