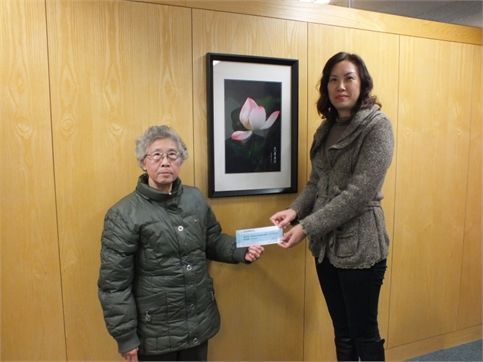 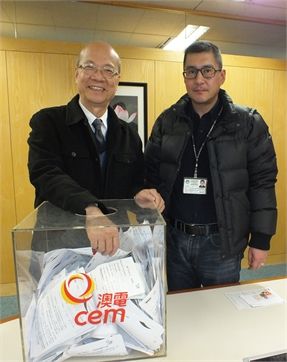 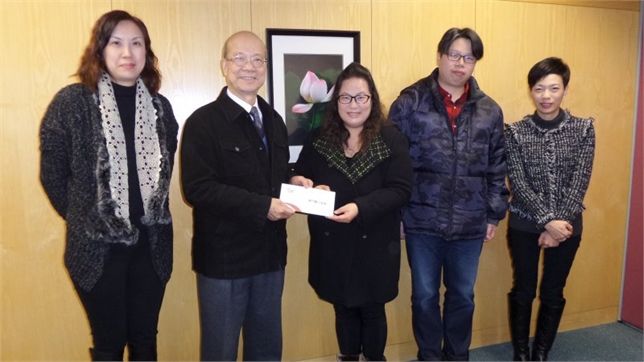 Aiming at allowing Macau citizens to have a better understanding of CEM major operations and services and to have a closer look at the local power generation process, CEM Energizing Tour was first launched in 2009, and since then attracted more than 24,000 citizens to visit Coloane Power Station. In 2014, more than 100 tours were conducted with nearly 4,200 visitors participated.

To encourage the visitors to provide feedback on the Tour, a lucky draw was launched, with an electrical appliances cash coupon of MOP3,888 to be offered to one lucky winner. Visitors were also encouraged to ‘LIKE’ CEM’s fan page at Facebook with supermarket cash coupons of MOP500 to be offered to five fans from all who liked the page. Lucky draw took place on 13 January at CEM Headquarter with the supervision of Mr. Edgar Pedruco, representative of Gaming Inspection and Coordination Bureau, and the results are:

Winner of MOP3,888 electrical appliances cash coupon is Iong Soi Meng. Ms. Iong, 75 years of old referred that “I am so happy to be the lucky winner of CEM Energizing Tour lucky draw. It was my daughter’s idea to join the Tour and it’s fun. We have joined the Tour for three consecutive years. The Coloane Power Station is so big and beautiful. And I have learnt a lot from the Tour, such as the energy savings tips. Now I know by using LED light bulbs can save a lot of energy and is more environmental friendly. Thanks CEM for this great experience!” The five winners of MOP500 supermarket cash coupons are Pan STeven, Joe Chan, Jose Li, Albert Lou and Summer Ip. Winners will be notified individually.

Plus, to endeavor to shoulder its social responsibilities and raise the public’s attention on people with special needs, for each LIKE received CEM donated MOP10 to the Macau Deaf Association. During the campaign period, 800 LIKES were received. Total MOP8,000 donation was offered. Cheque was presented on behalf of CEM by Iun Iok Meng, Advisor to CEM Executive Committee and Cecilia Nip, CEM Communications and Public Affairs Office Senior Manager.

Macau Deaf Association Director, Ms. Lau Sut Man represented the association to receive the donation. She thanked the initiative of CEM to support the Association, and through its campaign in Facebook to call the attention of the public about the necessity to care for the most need in the society, in this particular case for the hearing impaired’ citizens. Ms. Lau also took the opportunity to thank CEM for assisting to install free of charge special flashlight lamps for its members, and wished that both parties can continue to cooperate in the future.