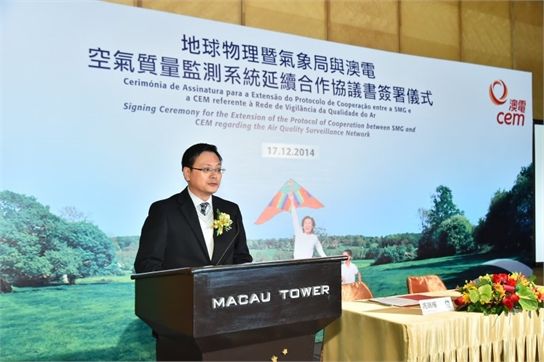 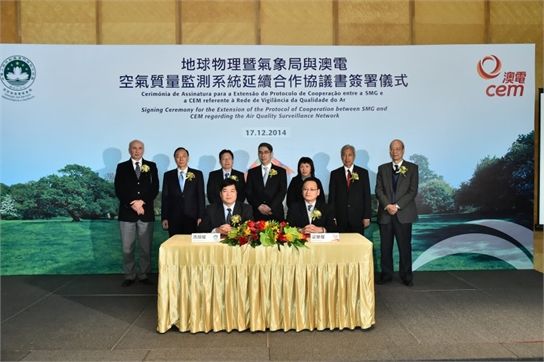 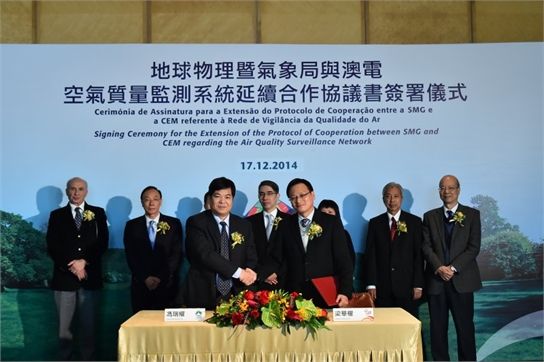 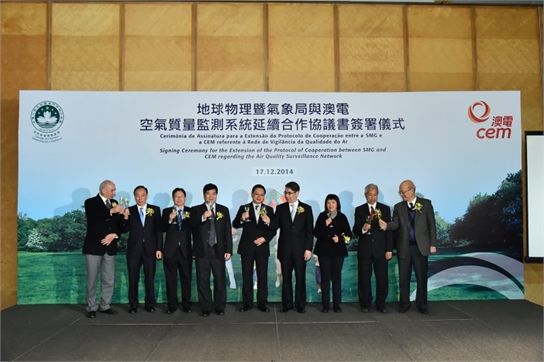 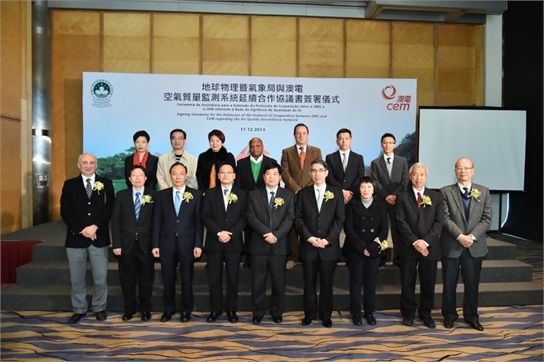 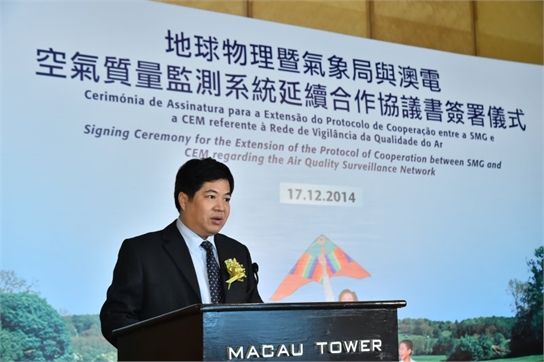 Macao Meteorological and Geophysical Bureau (SMG) and CEM signed a protocol on extension of cooperation for the existing air quality surveillance network at Macau Tower Convention and Entertainment Centre today.

Fong Soi Kun revealed in his speech that the further cooperation between Macao Meteorological and Geophysical Bureau (SMG) and CEM will facilitate CEM to collect information needed for making operation decisions, and thus optimize its operation and environmental performance at Coloane Power Station. The cooperation will also enable the SMG to further expand the monitoring network on the overall air quality in Macau and thereby gradually increase the number of monitoring stations under “Guangdong-Hong Kong-Macao Air Quality Monitoring Network for the Pearl River Delta region” to make contributions to monitoring the air quality in the region.

Fong Soi Kun added that SMG has always been proactive when it comes to keeping abreast of the trend and endeavoring to strive for the best at all times. At present, Macao’s air quality monitoring network has covered all areas at Macao peninsula, Taipa and Coloane. The air pollutants being monitored include sulfur dioxide, nitrogen dioxide, ozone, carbon monoxide, PM10 as well as PM2.5 that citizens are most concerned about. In 2012, Macau updated its air quality standard to the target value for transition period, which was proposed by the World Health Organization. In September this year, the air quality monitoring sub-station at Taipa Grande officially joined the “Guangdong-Hong Kong-Macao Air Quality Monitoring Network for the Pearl River Delta region” to further push ahead the joint work of Guangdong, Hong Kong and Macao.

In the past three decades, rapid economic and industrial growth in the Pearl River Delta has led to declining air quality in the region, and fine particles (PM2.5) is the major air pollutant that leads to reduced visibility. In order to solve the regional air pollution problem, SMG is cooperating with Guangdong and Hong Kong in carrying out a project on the PM2.5 study to improve air quality in the Pearl River Delta. The study is expected to be completed in mid-2017, and the findings will provide a scientific basis for Guangdong, Hong Kong and Macau governments to draft effective policies.

Bernie Leong reckoned that as a responsible enterprise, CEM has been dedicated to reducing the impact of its operations on the environment and meeting the current and future social demands of Macau citizens. CEM and SMG have established cooperation to share equipment and resources since 1992. In 2002, a meteorological station was set up at Coloane Power Station, and two air quality monitoring stations were established in Coloane in a bid to form an air quality monitoring system to measure the pollutant concentration in the air.

CEM has been investing in environmental protection facilities for years, including the Selective Catalytic Reduction System, sewage treatment plants, natural gas conversion projects, air quality surveillance network, waste storage areas and noise control facilities, in a bid to meet and even outperform the requirements and expectations of customers for CEM. Meanwhile, CEM has also strived to raise the environmental awareness of its business partners, educate the public on electricity conservation. To raise the attention of Macau-based companies on Safety, Health and Environment (SHE), CEM took the initiative to organize for the first time in Macau a “SHE Experience Sharing Workshop” in 2012, attracting about 20 companies and institutions to partake in the event. CEM believes that having the local companies and institutions working together would be mutually beneficial, and the exchange of experiences will surely contribute to boosting performances and consequently contribute for the sustainable development of Macau. In order to encourage contractors and suppliers to deliver the best performance, CEM has set up “Health, Safety, Environment and Quality Excellence Awards” since 2008 to recognize the performance of contractors, suppliers and employees. Besides, upon receiving ISO 14001 accreditation in 2003, CEM also obtained the ISO 14064 certification in 2010, being the first public utility in Macau and also the first power company in Macau and Hong Kong to receive the accreditation.

CEM expressed its heartfelt gratitude for SMG’s support and cooperation in improving the management of air quality in the past 22 years, and promised that it will continue to work closely with the SMG and other government departments concerned to further enhance environment protection and create a healthier living environment for Macau’s citizens.