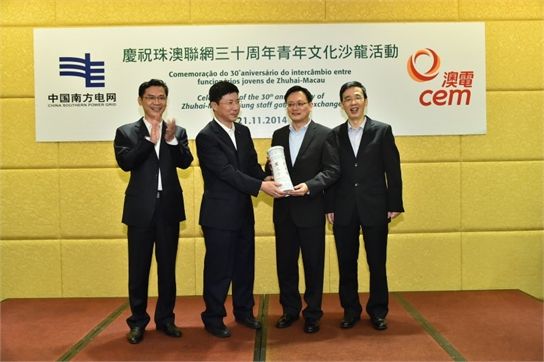 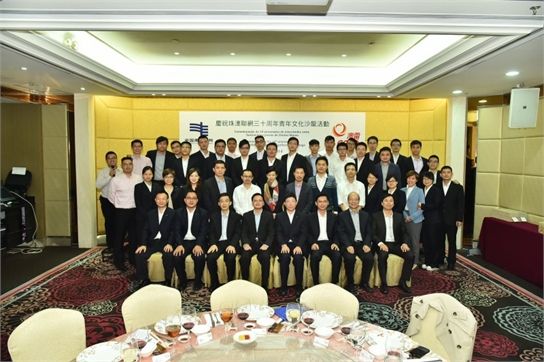 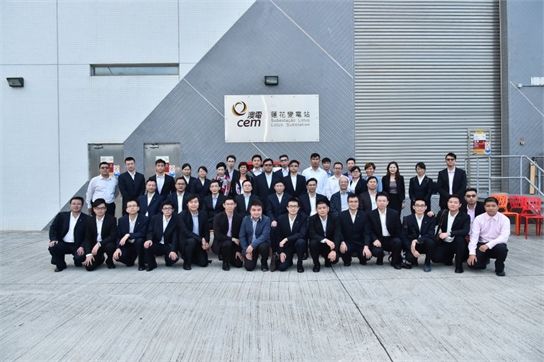 Companhia de Electricidade de Macau, S.A. (CEM), Guangdong Power Grid Corporation (GPG) Zhuhai Power Supply Bureau, together with the representatives of the two companies’ labor unions, jointly rolled out the cultural exchange event for young employees on November 21, commemorating the 30th anniversary of the power grid interconnection between Guangdong and Macau and strengthening the partnership of the two power companies. The activity aims to enable the young employees from the two places to learn from each other through visiting each company’s power facilities.

CEM and Zhuhai Power Supply Bureau each sent 15 employees to partake in the activity. The 30 participating staff members not only paid a visit to the two enterprises’ power facilities, but also held a symposium at the multi-purpose room of the Qinyun 220kV substation. Employees from the companies collected the soil of eight substations within the power grid interconnection to create two unique porcelain works, representing the close connection of the two places.

Bernie Leong indicated that Zhuhai, Guangdong has provided endless supply of power to boost the development of society and economy in Macau in the past three decades. Back in 2004, the percentage of the electricity imported from mainland China accounted for 7% only. However, at present, over 90% of electricity supply comes from the mainland. CEM sincerely appreciates the continuous support from Guangdong Power Grid Zhuhai Power Supply Bureau. The relationship between Macau and Zhuhai can be perceived as that between the tongue and the teeth. Zhuhai Power Grid and CEM have been working closely together under the mutual objectives of gaining benefits as well as regional cooperation. The cooperation and exchange from both cities have gone through numerous stages where improvement is blatant.

In addition, in order to ensure the stability and reliability of mainland power supply as well as to boost further close cooperation between GPG and CEM, a team of Guangdong-Macau network specialists was set up in 2002 to hold regular meetings. It proved that the key to reliable power supply in Macau is an impeccable reporting and communicating channel.

Zheng Jianping said the power supply to Macau has always been the first priority for Zhuhai Power Supply Bureau, and they have the most outstanding staff and the most advanced technologies in place to guarantee the most reliable power supply. The power grid interconnection between Zhuhai and Macau has been upgraded to 220kV quintuple-circuit and could be further upgraded to 110kV triple-circuit for emergency use over the past 30 years. Several communication mechanisms, such as Guangdong-Macau interconnection working mechanism, interconnection report and coordination mechanism, and emergency repair mechanism, have been established for safety and technical exchanges between the two places. The two places’ cultural and intellectual exchange have also been deepened through an array of recreation activities which can greatly contribute to the enhancement of power supply cooperation between Zhuhai and Macau built on mutual respect and understanding. Zheng Jianping quoted an old Chinese saying, “a man is steadfast at the age of thirty.” The power grid interconnection between Zhuhai and Macau has come to its 30th year and both parties witnessed the history and the responsibility manifested on the interconnection and they look forward to the future development. Young employees as the highlight in the activity epitomize the future of their companies and the hopes of Zhuhai-Macau interconnection. Zheng Jianping sincerely hopes that Zhuhai-Macau interconnection can continue to provide youngsters with ample opportunities to shine and thrive. In addition to the 30 young employees, executives attending the activities included Zhuhai Power Supply Bureau Secretary of Discipline Inspection Commission and Chairman of the Trade Union Ma Cheng Ming, Zhuhai Power Supply Bureau Office Director Li Gui Bing, Zhuhai Power Supply Bureau Vice Chairman of the Trade Union Wan Ju Sheng, as well as Advisor to CEM Executive Committee Iun Iok Meng, the Association of CEM & SAAM Workers President Charles Leong, CEM Power and Network Dispatch Department Senior Manager Benjamin Yue, CEM Network Operations & Maintenance Department Senior Manager Billy Chan, Network Planning, Design and Construction Department Senior Manager Wanda Clemente and CEM Communications and Public Affairs Office Senior Manager Cecilia Nip.