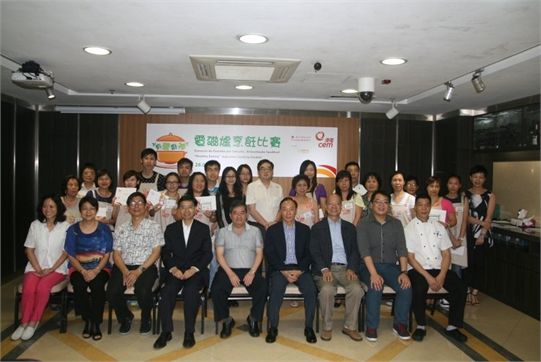 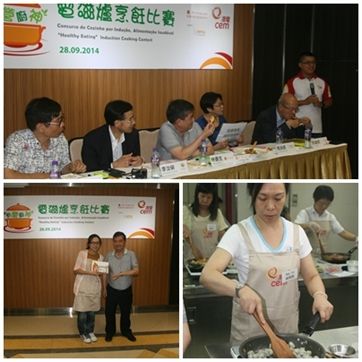 In order to promote the use of induction cookers and the concept of healthy eating, CEM and Macau Federation of Trade Unions jointly organized the “Healthy Eating” Induction Cooking Contest at Catering Services & Cooking Training Centre of Macau Federation of Trade Unions today. A total of 18 finalists strived for their best to win several awards.

Iun Iok Meng revealed in his speech that an increasing number of families and restaurants in Macau has turned to induction cooking in recent years, for they can stay away from the heat of the stove and get rid of the inevitable smoke created in the course of cooking. Another merit of induction cookers that one cannot overlook is the higher degree of safety in cooking. He was also convinced that food cooked in induction cookers would be equally palatable when compared with food cooked in traditional methods. During the contest, 18 cooking enthusiasts each designed and cooked a healthy dish using induction cookers. Without doubts, it was hard to decide on the winning dish among an array of equally extraordinary dishes. CEM hereby expressed heartfelt gratitude to the Catering Services & Cooking Training Centre of Macau Federation of Trade Unions, for its full support in the contest for three consecutive years, including providing venue and facilities for the contest. Support and efforts from the Macau Professional Nutritionist Association and professional judges were also greatly appreciated, for every participant benefited a lot from the judges’ insightful comments.

Based on the submitted recipes, Kuong Chi Fung commented on the participants’ efforts in coming up with dishes echoing with the theme "healthy eating." During the competition, the participants demonstrated extraordinary skills and techniques in cooking and dish decoration. All dishes manifested a quality and well-balanced combination of color, aroma, taste and nutrition. Through this contest, the contestants successfully broke the public’s deeply-rooted perception about the notion of "healthy eating" in the sense that nutritious dish is no longer contradictory to the words "palatable" and "presentable."

These enthusiasts were indeed capable of impressing the judges with their scrumptious healthy dishes. Kuong Chi Fung also said the Catering Services & Cooking Training Centre of Macau Federation of Trade Unions, which is a member of the catering industry in Macau, is greatly concerned about healthy diet and the safety of citizens and fellow staff members. Amid a tide of food incidents happened recently, the training centre has strengthened cooperation with IACM’s Food Safety Centre and stepped up efforts in enhancing the public’s food safety knowledge in various cooking classes. Moreover, it enhanced occupational safety and health education for those who engage in the catering industry in the hope of providing them with a safe working conditions.

As citizens have greater demands for the nutrition information while they pay more attention to the nutrition and health related problems, the center is now in full gear to prepare for the National Public Nutrition Examination and the offering of courses for junior nutritionists in a bid to satisfy the industry and residents’ needs.

The cooking contest was open to public and contestants were required to cook healthy family dishes using induction cookers on the spot. Upon intense competition, 18 shortlisted contestants made good use of various healthy ingredients with their proficient cooking skills, creative thinking and good interpretation of healthy eating. Every dish indeed manifested an excellent combination of color, aroma and taste. As a result, the golden, silver and bronze prize went to Chiu Mei Ha, Lau Iut Ieng and Van Siu Ieng respectively and electrical appliances coupons worth MOP3,000, MOP2,000 and MOP1,500 respectively were given to the winners. The “healthy green concept” prize went to Leong Lai Van and the winner won an electrical appliances coupon worth MOP1,500.