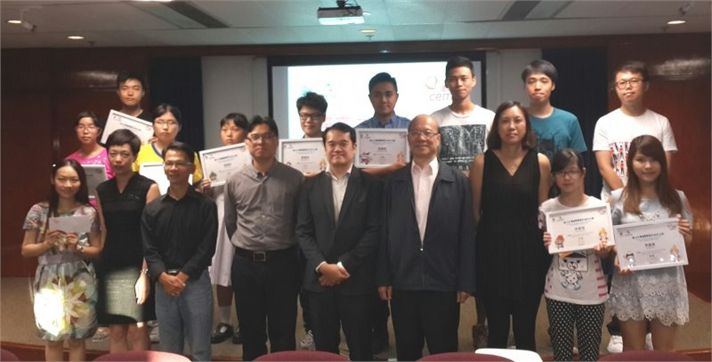 The Contest contains Open Group, Middle School Student Group and Primary School Student Group. The aim of the Contest is to celebrate Power Boy’s 5th birthday with Macau citizens. Entrants must focus on the theme and design buddies for Power Boy matching with CEM’s corporate image. Ten final entries selected by judges from each group were uploaded on Facebook for public voting, allowing citizens to vote for their favorite buddies. After vigilant counting and validation, all award winners were finalized who will receive cash prizes up to MOP7, 000. In the award presentation ceremony, Iun Iok Meng expressed that all entries were of very high quality. Winners’ artistic skills and creativity were amazing. The design concepts of many entries were based on eco-friendly and energy saving in corresponding with the vision of CEM. It also showed that both entrants and citizens pay high attention to energy conservation and treasure electricity usage, being able to assimilate into the daily lives. With the newborn mascots and Power Boy, CEM would be able to promote environmental protection and energy saving in a more vivid and diversified way in the future. One of the judges Stephen Chung considered that the high standard of entries made the assessment more difficult, some entries won with just a small difference in scores. He hoped that the local designers and amateurs would be given more opportunities in creation through organizing different types of design contest in the future, and also hoped such contests could arouse children and youths’ interest towards art and design.

Another judge, Wesley Chan was glad as the entrants were able to incorporate the message of energy saving into their design, and present them in a fresh and diversified angle.

Cheang Ka Pui, the open group winner, whose two entries were in the top ten final entries and one of the entries “Rocket Worm” won the championship. Cheang Ka Pui expressed her pleasure after the result was announced. The design concept of “Rocket Worm” was come from firefly. Firefly can emit light and light up the dark, which is the same as CEM — Supply electricity to light up the city. As a pet and playmate of Power Boy, the image design and color assortment of Rocket Worm represent the spirit of “vivacity, enthusiasm, nature and environmental protection” as well as the lifestyle of “frugality, harmony and pursuit of nature”.