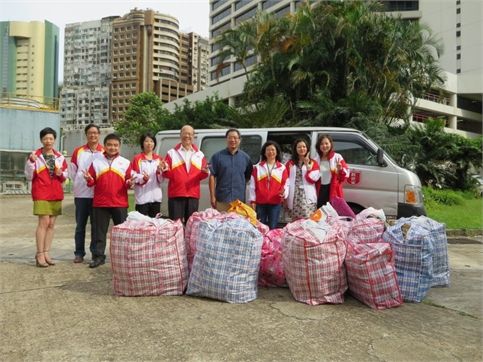 CEM always cares about local communities and cherishes the environment. CEM has held the Used Clothes and Toys Collection Campaign every year since 2004 to put the concept of environmental protection and contribution to the community into practice. The collection campaign was launched last month. CEM Ambassadors collected clothes and toys from the staff and called for their colleagues to donate items to Salvation Army in Macau, which will pass the collected items to those in need.

Under the tremendous efforts by the CEM Ambassadors Team, many CEM employees gave an encouraging response to the campaign and a large amount of clothes and toys were collected. A donation ceremony was held on 3 June at the CEM Building. Iun Iok Meng, Advisor to CEM Executive Committee and Cecilia Nip, CEM Communications and Public Affairs Office Senior Manager, as well as several CEM Ambassadors passed the collected items to Ody Leung, Operational Manager of Recycling Programme at the Salvation Army in Hong Kong and Macau Command.

Cecilia Nip said CEM has always been committed to fulfilling its corporate social responsibility. Apart from helping those in need in Macau, CEM also actively supports the environmental protection work by promoting the green office culture and organizing other various activities including “Car Free Day”, “Casual Wear Summer”, waste sorting and recycling, battery and laisee envelope recycling campaign, binder recycling and so forth to encourage employees to make their own contribution to environmental protection. CEM hopes to encourage its staff to put the concept of environmental protection into practice in their daily work through a series of activities.