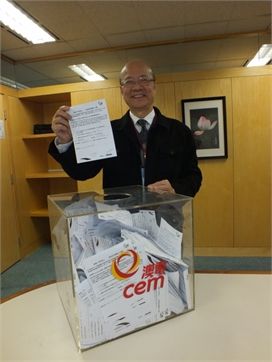 CEM Energizing Tour has been tremendously popular among Macau citizens since its launch in 2009. In December 2013 CEM achieved the significant number of 20,000 people having visited Coloane Power Station. In 2013 alone more than 100 tours were organized with over 4,300 citizens visited CEM infrastructures, including schools, local associations, companies and even international groups.

Besides having a memorable time, for all visitors who filled out a feedback form were entitled to win a MOP3,888 electrical appliances cash coupon in the year-end lucky draw. Moreover, visitors who uploaded their photos taken during the Tour onto CEM Facebook fan page at http://www.facebook.com/Energizing.Tour or LIKE CEM fan page had the chance to win supermarket cash coupons.

Lucky draw was held recently, presided by Iun Iok Meng, Advisor to CEM Executive Committee and witnessed by the representative of the Gaming Inspection and Coordination Bureau.

Winner of the MOP3,888 electrical appliances cash coupon is Tang Yut Ying, while the supermarket cash coupons were given respectively to Long Chim Fong, Wendy Kuok and Vincent Chan, whose photos are the top three with the most number of LIKES, and Liu Ho Yee, Ho Lai Peng and Mandy Huang, are the lucky ones drawn from all the fans that LIKED the Facebook fan page. Winners will be notified individually.

With the continuous overwhelmed response from the public, CEM will continue to organize the Energizing Tours this year. Throughout 2014, schools, companies, and local associations can book weekday group tours in Cantonese, Portuguese and English, with morning sessions from 10:00am to 12:00pm and afternoon sessions from 3:00pm to 5:00pm.

Groups are required to arrange their own transportation and should call 8393 1202 for reservation or fill in the Reservation Form at https://www.cem-macau.com and e-mail to visitcem@cem-macau.com or fax to 2871-9687. Public Tours will start from June till December 2014, in the first and third Saturdays of each month. Details will be announced in due time.