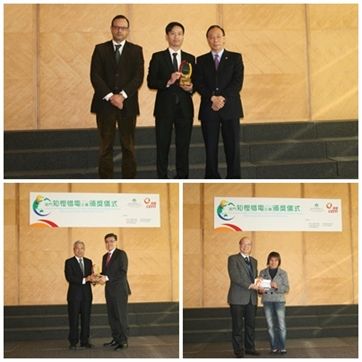 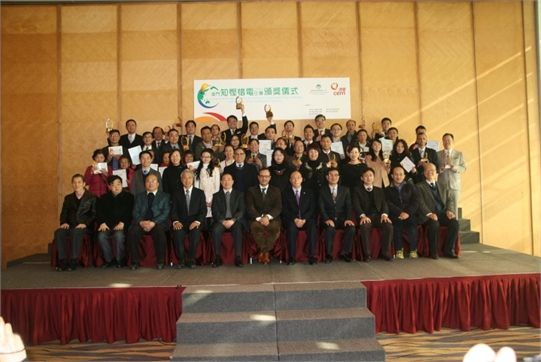 The award ceremony of the “Macau Energy Saving Contest 2013" was held at Macau Tower at 3pm today. The contest includes the following categories: Residential Group, Public Building Facilities Group, Restaurant Group and Hotel Group. Based on the six consecutive billing months of electricity consumption from May to October 2013 compared with the same period in 2012, all participating units saved a total of nearly 23 million kWh of electricity – an overall result that set a new record. Through the contest, CEM hopes to arouse public awareness in energy conservation, particularly those who are engaged in property management, hotel and catering industry.

In his address, CEM Executive Director Jorge Vieira thanked the Office for the Development of Energy Sector for its support, as well as Macau General Residents Association, Property Management Business Association of Macau, United Association of Food and Beverage Merchants of Macau, Macau Hoteliers & Innkeepers Association, and the Association of Building Contractors and Developers for their joint efforts in this contest.

Jorge Vieira said in order to encourage residential customers to pick up their energy-saving habits, this year’s contest continued to set the Residential Group, which received encouraging response and attracted participation from 1,200 residential customers. Other categories included Public Building Facilities Group, Restaurant Group and Hotel Group, which has drawn participation from 367 buildings, 7 restaurants and 38 hotels respectively. The results of the contest show that a total of 23 million kWh is saved. The champion of the Residential Group saved the highest ratio of electricity of up to 55%, proving that the energy saving awareness of citizens is very high.

Among the 1,200 residential customers who took part in the contest, the “Residential Group” winner Lei Iao Fun shared her key to success. She said that the method her family used to save energy was to use it only when necessary. Her family used less air conditioners or switched to a fan even on a hot summer day. They also used less lighting at home and used energy-saving bulbs.

In addition, most participants in the “Restaurant Group” and “Public Building Facilities Group” said that they have effectively saved energy with measures such as raising the air-conditioning temperature, replacing the existing fluorescent tubes to the energy-saving ones, shortening the running time of electrical appliances and strengthening training for staff.

In the Hotel Group, MGM Macau once again came out on top in Hotel Group C. At the award ceremony, Director of Facilities Management of MGM Macau Peter Chan shared his company’s knacks and experience in energy saving. He said MGM Macau won the Champion in Hotel Group C again because it further deepened the energy-saving technologies on the existing basis. As the current electric system used by the hotel has already been established, it is indeed difficult to substantially cut power consumption. However, MGM Macau still did an excellent job in power saving. There are two reasons behind this: first, the company used new LEDs, which can be applied in areas where they were not able before, thereby power can be saved; second, the company optimized the chilled water from the chillers by transforming it from fixed traffic flows to variable traffic flows, which further cut power consumption. The “Energy-saving Concept” award was granted to three hotels, namely Metropole Hotel from Hotel Group A, Hotel Royal from Hotel Group B, and City of Dreams from Hotel Group C.

Metropole Hotel was praised for adopting a number of energy-saving materials and designs to effectively reduce energy consumption, such as high-quality, lightweight thermal insulation materials, light-colored reflective paint, and all-LED lighting. In addition, Metropole Hotel has raised the airtight capacity of old and worn external walls to lower convective heat loss, and adopted double-layer hollow glass for heat and sound insulation. In terms of guestrooms, it made improvements in the layout and reduced the use of lamps by maximizing the utilization of light source reflections. It also used energy-saving equipment to achieve the best energy saving result .