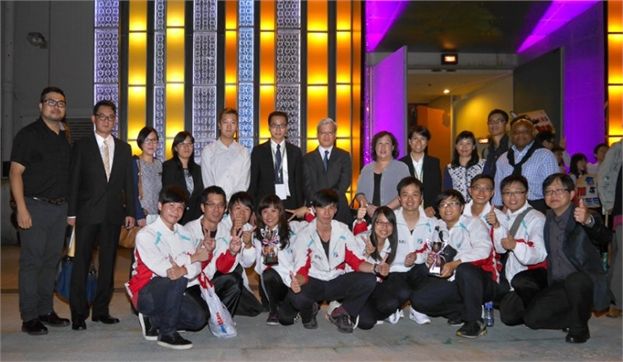 CEM and The Association of CEM & SAAM Workers win runner-up and champion of the 7th Guangdong, Hong Kong and Macau Safety Knowledge Competition

The 7th GHKM Safety Knowledge Competition drew to a successful end on 11 November at Hong Kong TVB City. Six teams from Guangdong, Macau and Hong Kong were divided into two groups - enterprise group and trade union group �V to compete with one another for the awards. In the end, Macau Federation of Trade Unions team, the representative of the Association of CEM & SAAM Workers, won the champion of the trade union team. CEM delivered stellar performance in the enterprise group to take the second place on back of their full preparations and encouraging team spirit. The competition will be aired on TVB at 7pm on 20 November.

The management of CEM has always been supporting its staff to participate in the competition, hoping to strengthen the staff��s understanding and mastery of the knowledge on occupational safety and health to prevent accidents and occupational diseases. Moreover, the event can provide an opportunity for them to compete against and communicate with the representative teams from Guangdong Province and Hong Kong on safety and health issues.

CEM, as a socially responsible company, should achieve remarkable safety performance. The statistics showed that CEM has seen a significant decline in the number of without lost time injuries over the past 10 years, and has no accidents record for over 28 months. This is attributable to the staff’s full understanding of the Occupational Safety and Health and CEM��s efforts to enhance the Occupational Safety and Health training.