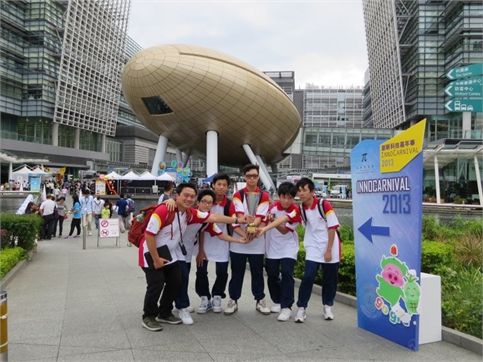 The top three winning teams were then invited to represent Macau to compete in the “HK TREE 2013”, which was held at the HK Science & Technology Parks on 9 November. HK TREE had its first edition held in 2006, being this year the 8th consecutive edition that HK TREE is organized. The event aims at raising the scientific and technological knowledge of the school students, and promoting their awareness of using renewable energy and realizing the important effect of renewable energy for the environment protection. HK TREE is co-organized with Hong Kong Science & Technology Parks, CLP and Electronics Technology Education Association (H.K.).

In this year’s edition of HK TREE more than 180 teams with nearly 800 students participated in the event. For the students representing Macau it was a great experience. Not only they felt honored to be representing the Territory, but also they were enthusiastic to have the opportunity to share their knowledge and creativity with the HK students. They all said they will keep this experience in their memories, and if possible they will try to join the event again next year.

This was indeed a great experience for all the school students involved and a tremendous successful event that CEM expects to organize once again next year with larger scale of participants and co-organizers involved.