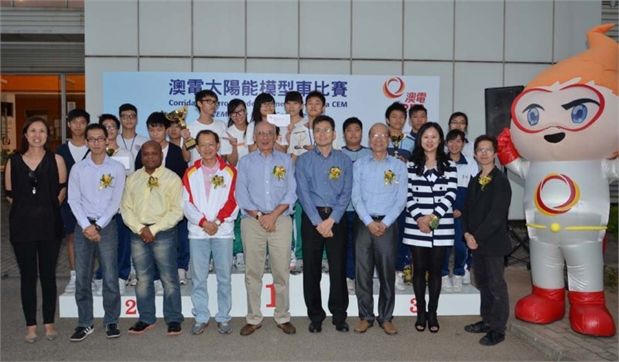 CEM organized this event with the objective of raising the scientific and technological knowledge of local secondary school students, and promote their awareness of using renewable energy and realize the important effect of renewable energy for the environment protection. Participating students were encouraged to design and make their own solar cars, and compete among themselves for the “Top Three Teams”, “The Overall Fastest Lap Award”, and “The Best Model Car Design Award”. All teams participated previously in a workshop conducted by HK TREE technicians in order to get ready for the “Race” and were provided with a solar panel, a motor and sponsorship for production, while all main parts of the model cars had to be made by the students.

João Travassos, CEM Executive Director, said in his speech during the closing ceremony that “It was an honor to CEM to host for the first time the Solar Model Car Race, especially because it took place inside our Coloane Power Station, and students and teachers could have a chance to have a closer look at our major generation infrastructures”. João Travassos thanked the support of HK TREE, the General Association of Chinese Students and Macao Youth Federation who collaborated to organize such successful event, and also thanked all participating students and teachers for their efforts and enthusiasm giving him hope that the future of Macau is in good hands. A panel of judges representing HK TREE, Macao Youth Federation, the General Association of Chinese Students and CEM helped to select ‘The Best Model Car Design Award, which was won by Colégio do Sagrado Coração de Jesus. The winning school received MOP1,000 and one trophy. Judges expressed being impressed with the outstanding quality and creativity put on the works by the students.

“The Overall Fastest Lap Award” was attributed to Colégio Diocesano de São José (2 & 3) who received MOP1,000 and one trophy. ‘Top three teams” of CEM Solar Model Car Race were Colégio Diocesano de São José (2 & 3) (Champion), Escola Tong Sin Tong (1st Runner-up), and Escola para Filhos e Irmãos dos Operários (2nd Runner-up) and received MOP3,000, MOP2,000 and MOP1,000 respectively, and a trophy. Besides the cash prizes and trophies received, the joyful atmosphere shared in the event, all participating students received a certificate. On top of that, the top three winning teams will represent Macau to compete in the “Hong Kong TREE 2013”, which is going to be held at the HK Science & Technology Parks on 9 November.