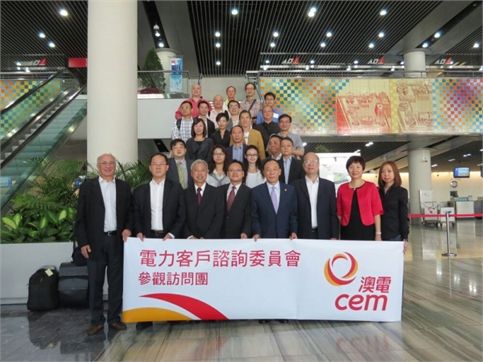 A 27-member delegation of CEM and its Customer Liaison Committee (CLC) departed from Macau International Airport for a five-day visit in Chongqing, Yichang and Wuhan. The delegation will mainly visit State Grid Chongqing Electric Power Corporation and the Three Gorges Dam Project, the largest water conservancy project in China and the world.

The delegation visited Chongqing Electric Power Corporation when they arrived in Chongqing and they were warmly welcomed by Liu Chang Sheng, Chief Engineer of Chongqing Power Supply Company and Xiao Dong, Vice President of the Electric Power Industry Association. CEM has a good relationship with the company, and they had studied the feasibility of cooperation between the two companies many years ago. During the visit, the two companies, as well as the Customer Liaison Committee, share experience in the field of customer services and receive a great deal of benefits.

The visit to the Three Gorges will mainly focus on the Three Gorges Dam located at the mainstream of the Yangtze River from Chongqing to Yichang, Hubei Province, which is the world’s largest hydroelectric power station and is also the largest dam ever built in China and the world. The construction of the project took 17 years from 1993 to 2009 and was conducted in three phases. Thirty-two 700,000-kilowatt hydroelectric generating sets, with a total installed capacity of 22.5 million kilowatts and an annual generating capacity of about 100 billion kWh, were installed upon completion. The Three Gorges Dam is largest hydropower station in the world. Through the visit, the delegation will deepen the understanding of the core benefits of the Three Gorges, including prevention and control, power generation as well as shipping, and learn about the construction and electricity generation of hydroelectric generating facilities. Established in 2000, CLC plays the role of a bridge to reflect the demands of different industries and customer bases. It is devoted to strengthening the communication and liaison between CEM and the customers, so as to enhance the transparency of CEM. Besides regular meetings, CEM also organizes visits to neighboring regions to allow members to enhance the awareness of the power industry. CLC visited Guangzhou Electric Vehicles Battery Changing Experience Centre, the Zhongzhou underground substation of China Southern Power Grid and Huizhou Pumped-Storage Hydropower Plant last year.