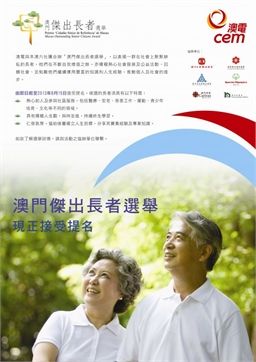 To promote lifelong learning and community service among retired seniors, CEM held the first “Macau Outstanding Senior Citizens Awards" last year. As the award was highly-received by the public, especially the senior citizens all acknowledged the event was meaningful, the company decided to carry on the event this year in recognition of the senior citizens who dedicated themselves in community service.

The event is organized by CEM and co-organized by Macau Federation of Trade Unions, the General Residents Association of Macau, the Women’s General Association of Macau, Caritas Macau, Fuhong Society of Macau and Macau Special Olympics, CEM expects to organize the activity to jointly encourage the retirees to have a life-long learning spirit and serve the community, and meantime encourage people from all walks of life to model after these senior citizens to make own contributions.

Candidates of the election should be permanent Macao residents at the age of 65 or above, and should be recommended or nominated by a co-organizer or nominator. Candidates may come from various sectors in the community, including industry and commerce, professionals, social service, education, culture and arts and full-time homemaker. Ten winners will be selected by a judging panel consisted of celebrities in Macau, and each of them will be granted a trophy and cash prizes of MOP5,000.