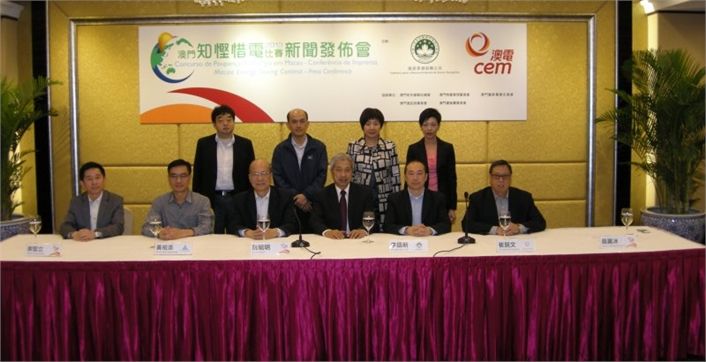 “Macao Energy Saving Contest 2013” to kick off this May

The Contest, lasting for a period of six months, will officially be launched this May. Comparison will be based on the six consecutive billing months of electricity consumption from May to October 2013 with the same period in 2012, and those who save the highest percentage of energy will be the winners of the Contest. The Contest will include the following categories: Residential Group, Public Building Facilities Group, Restaurant Group and Hotel Group.

Iun Iok Meng indicated that CEM has been dedicated to promoting energy saving via diversified means, and it has launched the Energy Saving Contest every year since 2009. The Contest in 2012 has been the most successful with the total energy saved close to 14 million kWh. The Contest this year, which has gained support from the government and associations again, will help advocate energy saving awareness to citizens, hotel and catering industries and property management companies. CEM hopes that all parties in the society can do their part in making Macao a true “energy-saving” city.

Keegan Cheang said better results have been seen in the Energy Saving Contest year after year, proving that there is still room for energy saving in the community as a whole. He said the industry must make improvements in aspects such as management of power demand and enhancement of energy efficiency. At the meeting, Keegan introduced the following categories in the contest: Public Building Facilities Group, Restaurant Group A (subscribed demand <130 kVA), Restaurant Group B (subscribed demand ≥130 kVA), Hotel Group A (subscribed demand ≤340 kVA), Hotel Group B (subscribed demand >340 kVA and ≤3,200 kVA), and Hotel Group C (subscribed demand >3,200 kVA). The registration date is set from today until July 31. All hotels, restaurants, building property owners and property management companies in Macao are welcomed to enroll in the Contest through the organizers or co-organizers. Gold, Silver and Bronze awards and an Excellence award will be presented for each category. Each winner will be granted a trophy. In addition, an extra “Energy-saving Concept” award is established to crown the winner from the “Hotels” category. Contestants for the “Energy-saving Concept” award are required to submit relevant information concerning the installation of the equipment, energy-saving measures and energy management before September 30, 2013 in order to compete for the award.

Cecilia Nip said that in order to encourage residential customers to use energy-saving methods, CEM added a “Residential Group” to the Contest last year. A total of 1,529 residential customers took part in the Contest and the champion saved up to 69% of energy. This proves that Macao citizens have very high energy saving awareness. Cecilia expects that Macao citizens will participate in this year’s Contest with the same enthusiasm as in last year. During the press conference, Cecilia introduced to the attendees the application method and rules about the “Residential Group” category. Residential customers can enroll online starting from today until July 31. Winners of the “Residential Group” category will be awarded cash prizes as recognition, with MOP3,000, MOP2,000 and MOP1,500 given to winners of Gold, Silver, and Bronze awards, respectively. In addition, 5 Excellence Awards will be presented with cash prize of MOP1,000 each. Residential customers can refer to the “Macao Energy Saving Contest 2013” on www.cem-macau.com to learn more details about the Contest, and enroll via the website. Participants who are contract holders can check their power consumption status during the contest period.