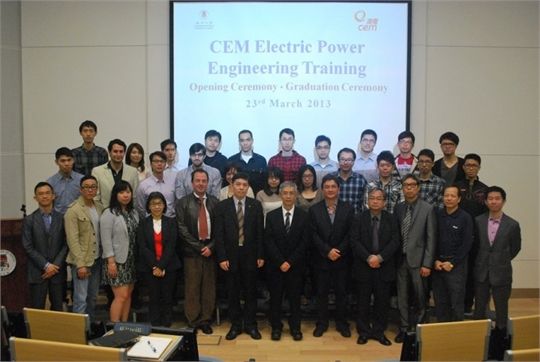 In order to increase its young engineers’ professional knowledge about power system and prepare them for future challenges and opportunities, Companhia de Electricidade de Macau (CEM) partnered with the Faculty of Science and Technology (FST) and the Centre for Continuing Education (CCE) of the University of Macau (UMAC) again to organize a 12-session “CEM Electric Power Engineering Training Program”. Experts and professors from Macau, Hong Kong and the mainland are invited as instructors for the 20 CEM engineers.

In his speech, Benjamin Yue indicated that as part of CEM’s systematic and structural training scheme, the training program was jointly organized by CEM in partnership with UMAC for the third time following the inaugural success the year before last. This scheme demonstrated CEM’s commitment to supporting the long-term development of higher education and dedication to cultivating young engineers in Macau. To better organize the training program, professors of the University of Macau and staff of the Human Resources Department of CEM have carefully studied and reviewed the previous curriculum and made improvements in the training course, teaching methods, testing and evaluation, enabling the course setup and teaching methods to be more practical and closer to the actual power system operations engineering. CEM has especially invited Dr. Wong Chi Kong from the Department of Electrical and Computer Engineering, University of Macau to act as the coordinator for this program, in order to help the company’s engineers better grasp the training contents and apply the knowledge to their career development.

Tam Kam Weng pointed out in his speech that CEM has been serving Macau for many years and has made important contributions to Macau’s economic development. He was glad that the FST of UMAC can jointly organize the training program again with CEM and the CCE of UMAC. He expressed the hope that the FST could continue to leverage on its professional advantages and cooperate with CEM as well as other organizations in more areas.

Leung Shing On said in his speech that the successful launch of the new round of training program should be attributed to CEM’s trust on the CCE as well as the full support and coordination of the FST. He said he would like to extend his heartfelt gratitude to CEM and the FST, and hopes CEM can continue to pledge its support and give advices to universities, so that they can cultivate talents in due course to tie in with Macau’s development.