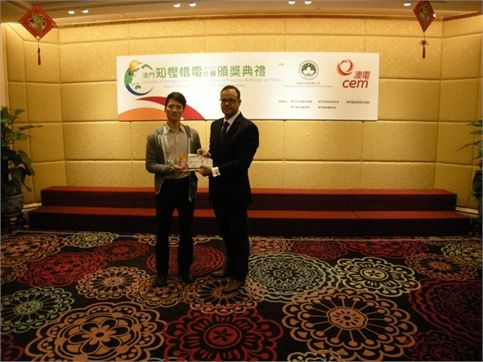 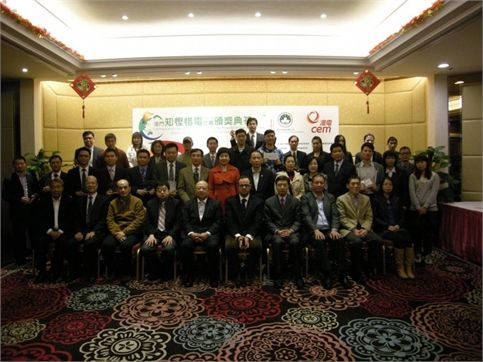 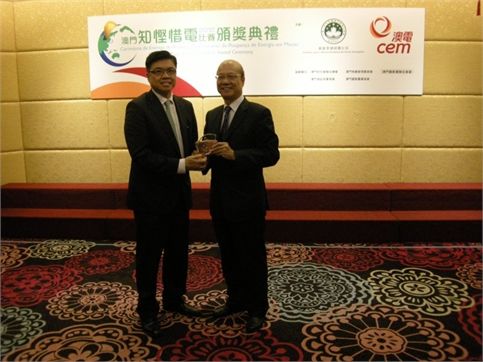 The Award Ceremony for the “Macao Energy Saving Contest 2012” was held today and the results were announced as well. The Contest is based on the comparison of electricity consumed by participants from June to November of 2012 against that from the same period in 2011. In late January, results of the Contest were reviewed by the jury, which consisted of Macau Energy Saving Association President Kwok Lam Sek, Macao Consumer Council Executive Committee Member Lewis Chan, Macao Association of Consumers of Public Utility Companies Vice President Chan Veng Iun, Macao Electromechanics Professionals Association President Cheang Io Tung, and Macao Construction Association Standing Director Andy Tam.

In his address, CEM Executive Director Jorge Vieira thanked the Office for the Development of Energy Sector for its support, as well as Macao General Residents Association, Property Management Business Association of Macao, United Association of Food and Beverage Merchants of Macao, Macao Hoteliers & Innkeepers Association, and the Association of Building Contractors and Developers for their joint efforts in this Contest. In addition, he also thanked for the jury of this Contest, including representatives from Macao Consumer Council, Macau Energy Saving Association, Macao Association of Consumers of Public Utility Companies, Macao Electromechanics Professionals Association, and Macao Construction Association. CEM hopes to take this contest as an opportunity to direct attention from the general public, especially market players in the property management, hospitality and catering sectors, to focus on energy saving.

To encourage citizens to pick up the energy-saving habit, CEM introduced the new “Residential” group in the Contest for 2012, which attracted the participation of 1,529 residential customers. Other groups include “Public Building Facilities”, “Restaurants” and “Hotels”, which saw the participation of 350 buildings, 35 restaurants and 32 hotels, respectively. The results indicated that all participants saved a total electricity of nearly 14 million kilowatt hours (kWh) within six months in 2012 compared with the usage during the corresponding period in 2011. The “Residential” group stood out with the Champion saving the most electricity of up to 69%, proving that the electricity-conservation awareness of citizens is very high.

Among the participating 1,529 residents, 866 of them successfully saved a total of nearly 400,000 kWh of power. The champion from the “Residential” group, Mr. Kuong Wai Lok, enthusiastically shared his successful experience, saying that anyone can figure out his or her own suitable way of saving energy as long as he or she put a little thought into it. He decided to reduce the use of air conditioner or completely turn it off, and switched to using the fan to save energy after participating in the Contest. In addition, he also reduced the daily use of electric lamps and resorted to energy saving bulbs or LED lights. The power consumption in the commercial sector is much higher than that in the residential sector. Most participants in “Public Building Facilities” and “Restaurants” groups stated that they strived to achieve energy conservation by adopting measures including turning up the temperature of the air conditioning, replacing the old fluorescent light tubes with energy saving light bulbs, shortening the time of using electrical appliances, and enhancing training for employees.

In the “Hotels” group, MGM Macau has succeeded in saving the highest amount of electricity and was presented with the “Energy-saving Concept Award”. MGM Macau Director of Facilities Management Peter Chan shared the company’s tips and experience in energy conservation. He stated that besides appointing a consultancy company to take charge of energy saving, other subdivisions under Facilities Management also took part in the effort and kept upgrading the facilities. Thus, MGM Macau lowered electricity consumption by 4.7 million kWh within six months of 2012 as compared with 2011, thus earning the title of the hotel with the biggest cut in electricity consumption.