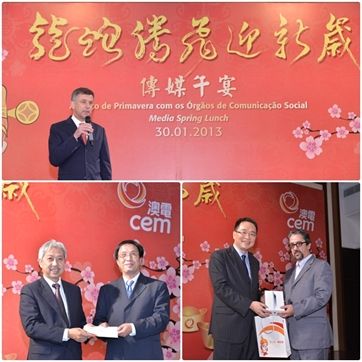 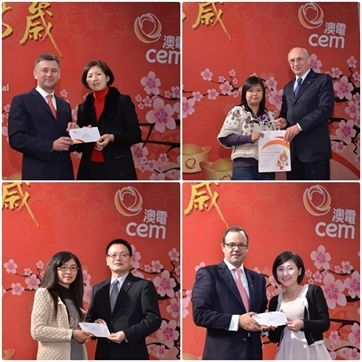 Companhia de Electricidade de Macau, CEM – S.A. (CEM) hosted a Spring Lunch with the media senior executives and frontline reporters to celebrate the Year of Snake at the Macao Tower Convention and Entertainment Centre on January 30, 2013. CEM Executive Committee members, Advisor as well as management from CEM different departments participated in the luncheon. In addition, Wang Xindong, Director of Economic Affairs Department of Liaison Office of the Central People’s Government in the Macau SAR, Victor Chan, Director of Government Information Bureau and CEM Customer Liaison Committee Vice-President Lei Chi Fong attended the luncheon as well. Franklin Willemyns, CEM Chief Executive Officer, expressed his gratitude to the media at the luncheon for their long-term support and role as a bridge which enables CEM to listen to the general public, adding that he looked forward to having their continued support.

Franklin Willemyns stated that with the rapid development of Macau’s economy in the past ten years, power consumption in Macau had soared 124%. Last year alone, the growth was 8.5%. CEM strived to maintain the stability of tariff with the best energy mix structure. Due to upsurge of fuel oil prices and unavailability of natural gas supply, importation has been the preferred option of power supply, and accounted 88.8%, while the remaining 11.2% was locally generated. As a social responsible company, to ease the impacts of high energy prices on citizens, CEM offered Tariff Clause Adjustment discounts to Tariff A customers throughout last year. Tariff A customers consist of residential as well as SME customers, accounting for 99% of the total number of customers. The discounts offered by CEM on the Tariff Clause Adjustment to Tariff A customers averaged 20.5% in 2012.

Investment in 2012 was also the highest since the last 5 years, CEM’s total investment reached MOP 972 million. Core projects included the Lotus substation, the second 220kV interconnection between Guangdong and Macau. These investments were very important to allow for an increase of importation. Another important investment has been the 110kV substation at the University of Macau new campus on Hengqin Island, and the corresponding 11kV distribution network and interconnection with Macau. Overall 2012 CEM achieved outstanding performances in terms of power supply reliability, service quality and occupational health and safety. It recorded Average System Availability Index 99.9999% and customer satisfaction level 87.6%. and no accident was recorded in 2012. CEM achieved the best ever results in all the above.

Stepping into 2013, the power demand in Macau is expected to grow on a continuous basis. It is estimated that the peak demand and the total consumption will rise by 6.9% and 5.5% respectively. Therefore, CEM will continue to invest in large projects and the investment for the whole year may reach similar levels as in 2012 (MOP1 billion). CEM plans to start construction of four 110/22kV substations respectively in the Macau North, Barra, Taipa and Cotai that will serve the Light Rapid Transit. Construction of the substations in the Taipa/Cotai shall start soon. Furthermore, CEM will soon start the construction of a high-voltage substation in Ilha Verde, in order to cope with the demand growth in the northern district of Macau peninsula. Lastly, Franklin Willemyns extended his gratitude to the support of the Macau SAR government, Macau citizens and media friends. CEM will continue to be committed to providing Macau with reliable power supply and high-quality customer service. In the mean time, CEM will fulfill its corporate social responsibilities to promote the economic and social development of Macau.