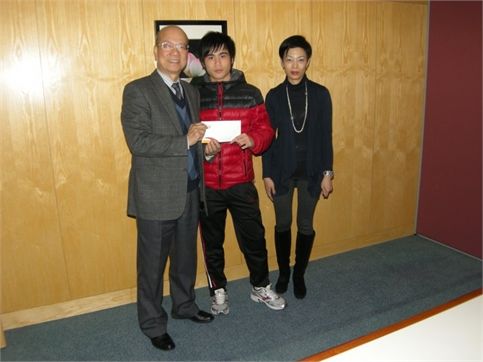 Since its launch in June 2009, CEM Energizing Tour has been a tremendous success with nearly 16,000 citizens visited CEM Coloane Power Station. In 2012 there were over 100 tours with over 4,200 visitors from various schools, local associations, companies and even international groups.

Apart from allowing the citizens to have a closer look at the Company’s facilities and operations, CEM offered a MOP3,888 electrical appliances cash coupon to one of the participants. Lucky draw was held on 11 January 2013, presided by Iun Iok Meng, Advisor to CEM Executive Committee, Cecilia Nip and Jaclyn Iun, Senior Manager and Manager of CEM Communications and Public Affairs Office. Winner Chio Song Kit is very happy and surprised of winning the grand prize. Cecilia Nip invited him to refer to his friends and family members to join the tour in 2013.

With the continuous overwhelmed response from the public, CEM announces that a new series of Energizing Tours have just started. Throughout 2013, schools, companies, and local associations can book weekday group tours in Cantonese, Portuguese and English. Morning sessions from 10:00am to 12:00pm and afternoon sessions from 3:00pm to 5:00pm are available. Groups are required to arrange their own transportation. For reservation please call 8393 1202, or fill in the Reservation Form at www.cem-macau.com and e-mail to visitcem@cem-macau.com or fax to 2871-9687.

Public Tours will start from June till December 2013, in the first and third Saturdays of each month. Details will be announced in due time. Besides receiving CEM’s souvenirs, visitors will have the chance to win a prize of MOP3,888 electrical appliances cash coupon by filling in a questionnaire to provide comments about the Tour’s arrangements, giving CEM insights for improvement.

Citizens are also invited to visit Energizing Tour Facebook fan page at www.facebook.com/Energizing.Tour, be part of this big fan’s group and share it with their family members and friends. After the tours, visitors can upload their photos onto the fan page and the three photos with the most number of LIKES in the year-end will receive supermarket gift-coupons of MOP300. Also at the end of 2013, from all LIKES received to the fan page, CEM will draw three winners to receive a supermarket cash coupon of MOP300 each.