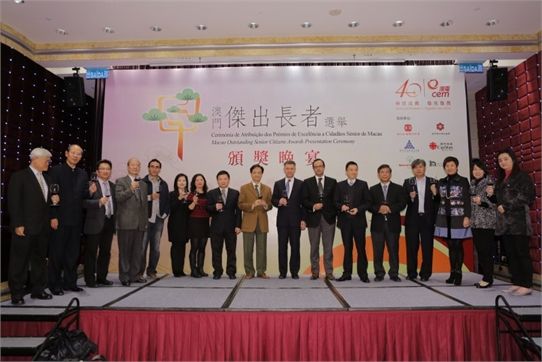 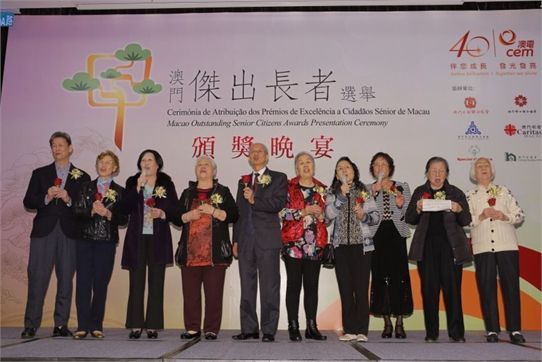 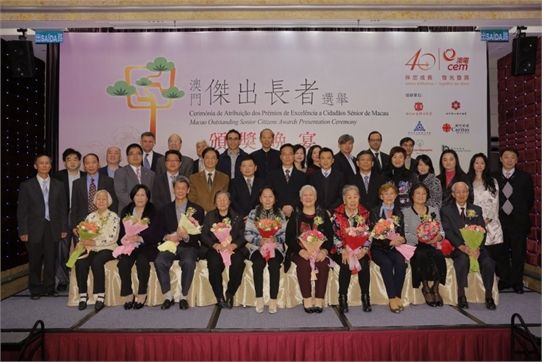 To mark the company´s 40th anniversary, CEM organized for the first time, jointly with the Macao Federation of Trade Unions, the General Residents Association of Macao, the Women´s General Association of Macao, Caritas Macao, Macao Special Olympics and Fuhong Society of Macao, the Macao Outstanding Senior Citizens Award. Speaking at the presentation ceremony, Frankly Willemyns, Chief Executive Officer of CEM, commended the winners and said that, since the start of this activity in mid-2012, a total of 36 nominations have been received. Owing to the very high level of the candidates, it was quite difficult for the members of the judging panel to select the winners. Willemyns mentioned that the stories of the elders told us that “People from all walks of life should model after these senior citizens, who maintain a life-long learning spirit and serve the community, to make their own contributions”, he said.

The winners came from various sectors in the community, aged between 68 and 82. One of the winners, due to his perseverance, has won numerous swimming gold medals. Another one founded a recreation association to serve the elderly. One winner who gives painting lessons free of charge to retarded persons. There was also a great lady, who dedicated heart and soul to care of her three children with intellectual disabilities.

The eldest winner, Ms. Wong Shu Chon, at 82, is still full of energy, having continuously served for 10 years as a volunteer nurse at Caritas Macao. Being also a practitioner of Traditional Chinese Medicine, Ms. Wong helps to measure blood pressure at the centre for elderly and also provides answers to questions regarding common elderly health problems. On the other hand, one of the winners Mr. Ng Soi On said that he has served the community for over fifty years. Since his youth he has participated in various meaningful social works. Currently, one of his hobbies is to organize associations of calligraphy and painting. He has published several books to promote the art of calligraphy, thus enjoying a full and meaningful life. His life-long learning spirit and no rest after retirement principle have set a good role model for the community.

At the presentation ceremony, each winner received a trophy and electrical appliance coupon worth MOP5,000 as incentive, and all overjoyed. Afterwards, the award recipients sang in a chorus a Chinese song that stresses no matter how many challenges one encounters, one should never give up, so as to enjoy a rich and wonderful life.

In addition to members of the judging panel, guests attending the presentation ceremony included Director of the Macao Social Welfare Bureau, Iong Kong Io; Guan Xiaokun, Deputy Director of Department of Social Affairs under the Liaison Office of the Central People´s Government in Macao SAR, Samio Lou, Deputy Director of Energy Sector Development Office, Members of the Macao Legislative Assembly, José Pereira Coutinho and Ng Choi Kun; President of the Board of Directors of the Macao Federation of Trade Unions, Chiang Chong Sek, Vice-President of the Board of Directors of the General Residents Association of Macao, Lau Veng Si; Vice-President of the Board of Directors of The Women´s Association of Macao Ada Chan; Secretary-General of Caritas Macau, Paul Pun Chi Meng; Executive Director of Macao Special Olympics, Sio U Hong and Administrative Manager of Fuhong Society of Macao, Jojo Cheok.