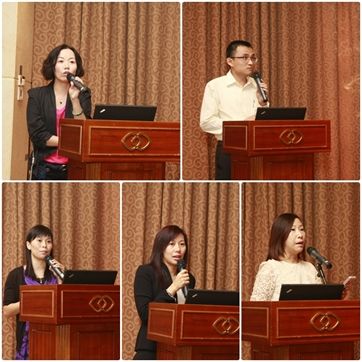 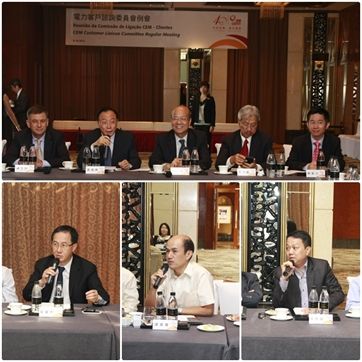 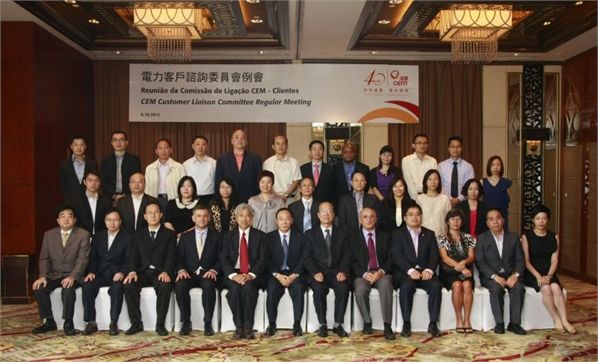 CEM Customer Liaison Committee (CLC) held its regular meeting at Sofitel Macau at 11:00a.m. today. CLC President Vong Kok Seng, Vice-Presidents Lei Chi Fong and Iun Iok Meng, CEM Chief Executive Officer Franklin Willemyns and other CLC members attended the meeting. CEM representatives made the presentations on “Introduction of Electronic Meter”, “CEM Major Projects in 2013”, “CEM CEM SHEQ Awards for Contractors and Suppliers 2012”, “CEM Customer Satisfaction Survey 2012”, and “CEM e-Service Mobile Apps”. In the meantime, CLC members also raised their opinions and suggestions to CEM. Presently, a total of approximately 210,000 residential customers in Macao are using mechanical meters. In order to improve the accuracy of the meters, CEM began gradually replacing mechanical meters with electronic ones since March of 2012, and so far nearly 7,000 meters have been replaced. Comparing with mechanical meters, the accuracy of electronic meters is improved from ±2% to ±1%. Meanwhile, they can prevent interference and help to avoid irregular electricity consumption. CEM also carried out quality supervision on meters and submit reports to the Office for the Development of the Energy Sector on quarterly basis, so as to ensure the accuracy of the meters.

To cope with the economic development of Macao, CEM will continuously invest in various infrastructure projects in 2013. In order to provide power supply to the light rail transit projects, CEM will build 4 extra high-voltage substations in Macao and Taipa. Projects in Taipa are expected to be completed in the second half of 2014, while projects in Macao are expected to be completed by the end of 2015. Green elements including plants on roofs and design fitting with the surrounding environments will be merged into the new substations. Recently, CEM has gained approval from the government to build a substation in Ilha Verde, in a bid to meet the increasing power demand in the Northern district. The substation is expected to be completed by the end of 2013.

The automation systems of CEM power and network dispatch center has been running for more than a decade. It will be upgraded to adapt to the needs of Macao’s fast development as well as the needs of future system operations. With the support of consulting firm, bidding documents will be completed before the end of 2012. Hardware upgrades as well as system implementation will also be carried out in 2013 and 2014, and trial runs for the system are expected to commence before the end of 2014.

Since 2008, CEM has been presenting awards to contractors as well as suppliers who have outstanding performances in terms of safety, health, environmental protection and quality, in a bid to promote the importance of quality, environmental protection and health & safety at work. The panel of judges is comprised of professionals, members of CEM as well as representatives of relevant local associations to select the winning enterprises. CEM continue to hold such competition this year, enrollment details have been uploaded on CEM website: www.cem-macau.com.

Since 1999, CEM has conducted surveys yearly via its customer service centers and by phone, in a bid to review the level of satisfaction of customers for various services of CEM. It successfully interviewed 1,000 customers in July and August of this year. The survey results indicated that customers’ satisfaction towards CEM reached 88%, and they generally expressed satisfaction towards the quality and reliable power supply by CEM. Apart from the launching of online services www.cem-macau.com earlier this year in response to the growing popularity of the internet and smart phones, CEM has recently developed a mobile application to allow customers to check or manage their bills and various online services, such as payment reminder and meter self-reading at any place and any time. During the meeting, CEM representative demonstrated how to use the application, which is expected to complete testing and be launched for customers to download before the end of 2012.

Besides the regular meetings, CLC will also organize delegations to visit neighboring regions every year, as to let committee members to learn about the operation and up-to-date knowledge of the electricity industry and to improve the quality of power services in Macao. CLC will pay a visit to the Customers Service Center of the Guangzhou Power Supply Bureau and Huizhou pumped-storage power station on 16 and 17 November.